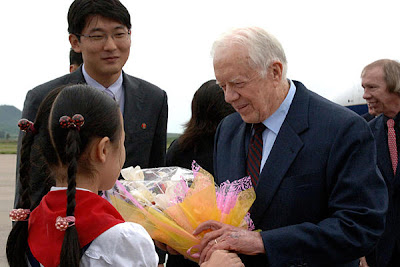 Read all about President Jimmy Carter's third visit to Pyongyang on his blog:


We will be working hard in our few days in Pyongyang to learn as much as we can about the North Korean position. I hope we will be able to return to the US and Europe with a positive and constructive message. We have been told that our visit here is seen as helpful in establishing a positive atmosphere and that the people in both North and South expect a lot from us.

It is to my mind a tragedy that, more than 60 years after the Armistice that ended the Korean War, North and South Korea have not signed a peace treaty. My country, the United States, is South Korea’s guarantor, which creates enormous anxiety among the North Korean people and drains their political energy and resources.

Yup. The North Koreans were hoping Mr Carter would do two things for them: Bring food for them, and then carry water for them.

Anyway, we also get news (via Yonhap) that Kim Jong-il proposed to Carter that the leaders of the two Koreas hold a summit:


"He specifically told us that he is prepared for a summit meeting directly with President Lee Myung-bak at any time to discuss any subject directly between the two heads of state," Carter said, referring to a message he said he received from Kim hours earlier.

"Although we did not meet with the leader of North Korea, when we had already departed from our guest home, we were asked to come back to receive a personal message," Carter said in a press conference. ...

South Korea, which has repeatedly said it is open to a summit with North Korea, had yet to respond to the proposal. On Tuesday, South Korean Foreign Minister Kim Sung-hwan had downplayed the Elders trip, saying Pyongyang should rather speak to Seoul directly.

Kim Jong-il "sent word he is willing and the people of North Korea are willing to negotiate with South Korea or the United States or (the other powers involved in six-party talks) on any subject at any time and without any preconditions," Carter said.

GI Korea at ROK Drop had some clear opinions on the subject:


Kim Jong-il is just making this announcement because he knows President Lee won’t agree to it until the North Koreans apologize for sinking the Cheonan and shelling Yeonpyeong-do island last year. This make Kim Jong-il look like the reasonable party and he can let the useful idiots like Jimmy Carter and company to criticize President Lee for not agreeing to the summit. What President Lee should do is agree to the summit request but only if Kim Jong-il comes to Seoul for the summit like he promised the late former Korean President Kim Dae-jung.

I think GI Korea may be right that there is a strong possibility this is the Pyongyang regime's attempt to look like the reasonable one (and let's face it: both Tokyo and Pyongyang are often very good at playing off of Seoul in order to look like the rational one), but part of me believes this is sincere. That is, if President Lee agrees to meet with the Dear Leader, maybe KJI thinks he stands to gain something material from it.

My recommendation would be to agree to meet, pushing for Seoul or Kanghwa-do (or some place north near Panmunjom) as the venue but not sticking to it if it has to be in Pyongyang. If KJI insists it must be in North Korea, make it Kaesŏng. Don't go to the capital.

The reason I say this is that we are at a crossroads. Kim Jong-il has had a major brush with death (i.e., his stroke and possibly cancer or at least a cancer scare) and he is smart enough to read the writing on the wall. If he really is grooming his son to take over — and if he is actually allowed to — it may be that he's being set up to be the kinder, gentler North Korea leader. Heck, Kim Jong-il himself may be poised to make a grand gesture.

At the very least, now is the time to start rebuilding personal relationships, allowing each side to start seeing the other as someone they can work with. It is in our best interest if North Korea starts to trust us.

But don't bring anything more expensive than a bottle of Chivas Regal. The most expensive item for this summit should be train fare for Lee and his entourage (if it's in North Korea) or three nights of accommodations at the Shilla Hotel (if it's in South Korea).
on April 29, 2011