No, Trump, he really did go to Harvard... 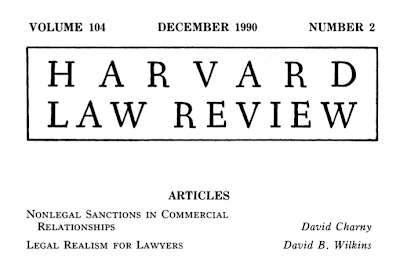 Now I'm not so sure I should be a birther. Donald Trump is now seems to be suggesting that President Obama didn't go to Harvard, or at least was grossly unqualified:


“I heard he was a terrible student, terrible. How does a bad student go to Columbia and then to Harvard?” Mr. Trump said in an interview with The Associated Press. “I’m thinking about it, I’m certainly looking into it. Let him show his records.”

Uh-huh. It took me all of three minutes to go into the Harvard Law Review archives (on PDF) and look at some random edition during his tenure there (in this case, December 1990) and see his name listed in several places as the editor and president of the Harvard Law Review, a highly coveted and prestigious position one would scarcely imagine going to some dunderhead.

Below are images I snapshot from page iii.

This is now just getting ridiculous. Maybe since Trump has more money than all his own lawyers he assumes he's also smarter than they are (and not just incredibly lucky, starting with massive seed money from his dad), so he doesn't really grasp that Obama might actually be his intellectual superior.

Of course, if Obama were Trump's intellectual superior, that would make some folks like Trump all the more, since there is a disturbingly high number of folks out there who decidedly distrust and dislike "intellectuals." They're like the Khmer Rouge that way.

By the way, I have the entire PDF to send to anyone who'd like to see it. It lists dozens of people also on the HLR who could probably attest to having known him there.

And finally, we have this (the whole thing is good, but the exchange in question starts just after 2:00)...

Letterman versus Dr Phil: Is Trump a racist or just an idiot?

By the way, this is interesting:


A government file on Barack Obama Sr. said that Harvard University, where he was studying, told immigration officials it would “cook something up” to force him to return to Kenya in 1964.

The immigration file, which was released under freedom of information laws, contains records of Mr Obama Sr.’s time as a student at the universities of Hawaii and Harvard between 1959 and 1964.

It may solve the long-running mystery, described in the President’s memoir, of why his father really left the US, only returning to see his son once before he died.

An April 1961 memo said that a University of Hawaii employee called to report that Mr Obama Sr. had married Ann Dunham, the future president’s mother.

She warned that he was already married to a woman in Kenya and had been “running around with several girls” since arriving and that he had been warned to curb his “playboy ways”.

I guess that was too wordy even for the long form.