It must be a slow news week, because I keep seeing this news everywhere:

The money is believed to be the proceeds of an illegal internet gambling operation, for which one of two brothers is already in jail. 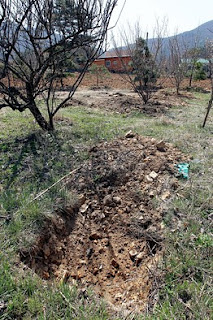 Their brother-in-law helped out by burying the cash, and then helped himself to some of it, police said.

When he then accused a landscaper of stealing a chunk of cash, police moved in and unearthed it, they said.

In addition to the BBC above, you can read the same story at AFP, Huffington Post, the Wall Street Journal, and the Christian Science Monitor. So to liquor store owner, massage parlor worker, party girl, and suicidal offspring of a Tiger Mother, add Internet gambling ring operator and burier of ill-gotten gains in garlic field to the list of stereotype memes of Koreans.


Oh, and obligatory dumb joke: No, Mr Lee, that's not the way to make your money grow.