This is going to be an occasional but on-going feature here at Monster Island: taking lengthy or significant comments I left on other blogs and bringing them "home" to this blog. Back in the day, before preparing to leave Seoul for Honolulu, I wrote a lot of comments, especially at The Marmot's Hole. Here's one from March 2006...

It reminds me of my personal run-in with the court system. Most foreign nationals, apparently, are funneled through a certain court so that interpreters and what-not can be more easily pooled.

I was there because I was challenging a 1 million won fine for driving without a license (which I successfully got down to a 100,000 won fine for not having my license in hand), but some of the other “foreigners” there were in for violent crime or theft. While I drove myself to the courthouse, some of these people were marched in through a special entrance in the back. 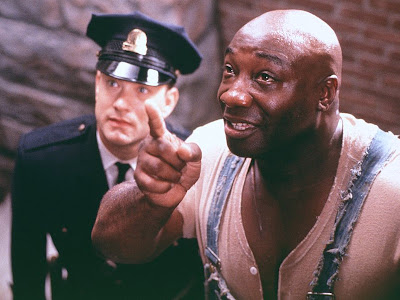 There was this one guy who was huge: NBA tall and NFL wide, built like that really big guy on Green Mile who cures everybody of their hacking cough.

He took advantage of his time before the judge (his was a preliminary hearing of some kind) to make a complaint about the prison food: he wasn’t getting enough. Apparently the rations were tantamount to starvation for someone of his size. Also, he couldn’t eat any of the spicy stuff, and he asked the judge to give him a different diet. Green Mile Dude was very soft-spoken and polite throughout.

The judge, however, said he has no control over the prison food. Next!

UPDATE (present era):
I learned a lot from that encounter with the judicial system, including that the court system seemed to try to go out of its way to be fair to the "foreigners" who'd gotten arrested (which included a few kyopo).

I also learned that even if your Korean is pretty good, take advantage of having a translator, because they know their stuff and they just might couch things in a way that helps your case (which also makes it in your interest to be nice to them).

Also, be respectful and contrite when facing the judge. It is not the place to cop an attitude (and I really could have, considering why I was there).