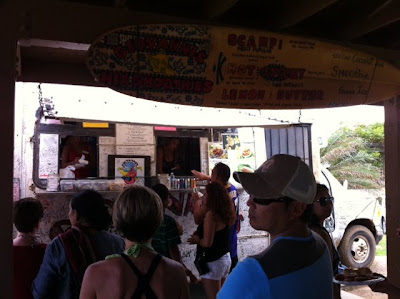 I'm starting my weekend early by playing tourist. After getting free samples at Dole Plantation and ruining my favorite white tee with plum powder and 파인주스, we have headed to the North Shore for shrimp scampi at Giovanni's Shrimp Truck. 냄새 좋아 ...

UPDATE:
After viewing sea turtles coming ashore at Laniakea Beach (photos forthcoming), we headed for historic Haleiwa for a shave ice at Matsumoto's and then a coconut latte at Coffee Gallery (which closes at 8 p.m. but leaves their wifi-equipped lanai open indefinitely, a cool business model methinks).

This was followed by a delicious ahi (tuna) burrito at Cholo's Homestyle Mexican Restaurant (supposedly the best Mexican food on Oahu, which is a bit like being the best Mexican food in Seoul). While the ahi burrito did not taste like authentic Baja California cuisine, it was still incredibly good (very tender ahi, which tends to dry out when you cook it, which is why I prefer it as sushi).

UPDATE 2:
I should point out that the itinerary was all the work of "M," who is quite adept at figuring out interesting places to go on this island. I don't think it would have occurred to me to spend a leisurely day doing these things without her prodding.

Also, I had no idea Laniakea Beach was such a great site for viewing sea turtles. I had driven by there a number of times on the way to Waimea Bay (which has a great rock for jumping off of, and is a fun place to watch high waves crash during the winter months), but I assumed all the people standing there were just plain old tourists doing plain old touristy things. Is it my fault sea turtles are hard to see from Kamehameha Highway?