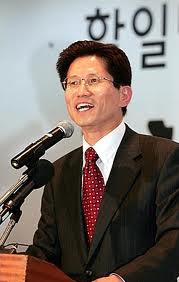 The governor of Kyŏnggi-do Province (Gyeonggi) is saying the biggest threat to South Korea is not North Korea or China: it's the lack of new South Koreans that will become economic producers later on.


The biggest threat to South Korea’s economic health isn’t from North Korean aggression or Chinese competition, according to Kim Moon-Soo, governor of the country’s largest province and a potential presidential candidate. It’s from the country’s low birthrate.

South Korea will face “a very big obstacle to our growth” unless families have more babies, Gyeonggi Governor Kim said in an interview at Bloomberg’s headquarters in New York. The government needs to be “more active” in providing child care and lowering families’ education cost, he said.

Women with careers, who tend “not to marry and not to have children,” have added to this “difficult” issue, said Kim, the third-most-favored candidate from the ruling Grand National Party for next presidential election, according to a Realmeter poll this month. Gyeonggi province has introduced incentives for encouraging government employees to have more children, Kim said.

South Korea’s fertility rate was 1.21 per woman in the last five years -- the fourth-lowest in the world, according to United Nations data.

Nope, it's the fault of those selfish career-minded women. I'm sure Governor Kim will do just fine in next year's presidential race.