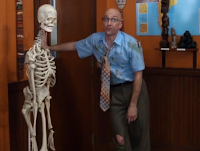 The dean explains how a race kerfuffle broke out among the various food truck vendors at the World Food Festival on campus.


I was just trying to feed hungry foodies.... I didn't even know there was a difference between North and South Korean barbecue.

I mean, M*A*S*H lasted longer than that war! Get over it, amiright?

Of course, this is meant as satire (the dean is a goofball), but it did get me to thinking that maybe so many Americans ask if you've come from North Korea or South Korea is that they actually think North Koreans really are represented in substantial numbers anywhere outside North Korea, neighboring northeastern China, and perhaps Japan.