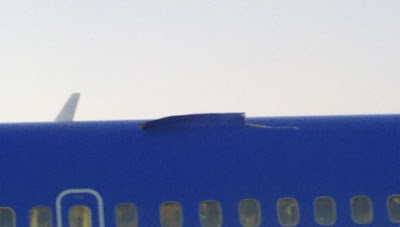 I don't know how well publicized the news has been about the Southwest Airlines jet that ended up with a hole in it due to metal fatigue, but it has a lot of people in the US freaked out.

We've been hearing a lot about speculation that the nature of short-haul flights — far more frequent "cycles" of take-off and landing with the concomitant pressurizing and depressurizing than with long-haul flights having the same "mileage" — may have heavily contributed to the "rupture" and that makes people worried:


Southwest Airlines' older aircraft plus its famously efficient short-haul operations — requiring planes to fly an average of six times a day — probably contributed to the fuselage rupture that forced a jetliner carrying 118 passengers to make an emergency landing in Arizona last week.

Aviation experts said the aluminum skin of the 15-year-old Boeing 737-300 could have become fatigued from the stress of daily landings and takeoffs as well as frequent changes in cabin pressure.

Six flights a day? Does that not sound like a Seoul-to-Cheju milk runner? The first thing that occurred to me was that that situation — frequent short-haul flights covering a distance of hundreds, not thousands, of kilometers — perfectly characterized the domestic operations of South Korea's local carriers, Asiana, Korean Air, and a handful of discount start-ups. Ditto with domestic carriers in next-door Japan (as well as operators between most Korean and Japanese destinations).

Sure enough, there are others who thought the exact same thing:

"Our two 737-400 aircraft are only 14 years-old. Given the fact that commercial airplanes normally retire after 30 years in operation, our planes are fairly new. We have been making all-out efforts to keep our planes in good shape," an Asiana Airlines spokesman told the newspaper.

That's good to know, but it rattles the public that this kind of thing is being discovered and diligently addressed only after a serious incident occurred. If I'd been on a short-haul flight from, say, Seoul to Fukuoka and I suddenly got an instant skylight above my seat, I might be booking passage on seagoing vessels for the rest of my natural days.