Now you know why no birth certificate 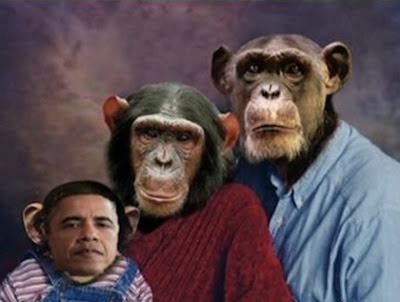 Um, yeah. Pretty offensive. It's not mine, of course, but it does come to us courtesy of someone else from OC. In this case, it's a Republican official in OC, who says it was just a joke.

To their credit, other California Republicans are saying that it's not acceptable as "just a joke":


Among Davenport’s detractors (including, one would hope, “everyone else”), local news station KCAL caught up with former California Republican chairman Michael Schroder, who correctly posited: “no average person would send this out and feel comfortable with this, that this was just a joke.” Then again, Schroder also notes Davenport doesn’t come into this embarrassment with a clean slate– among the people in Orange County Republican politics she has defended are an official who sent an email with an illustration of the White House covered in watermelons and an official who opposed the installation of grass near beaches on the point that “grass attracts Mexicans.”

Ah, yes, the watermelon controversy, by a local mayor who simultaneously claimed that his watermelon-themed Obama email was just a joke and that he didn't know about stereotypes involving Blacks and watermelon. But Obama seems to bring the worst out in some Republicans (see this for another example).

But I try to look on the bright side. If they're busy sending racist emails to each other, that leaves less time for Orange County Republicans to intimidate Hispanic American voters at polling places or suppress their vote with targeted mailings.