Anywhere in Korea in less than two hours 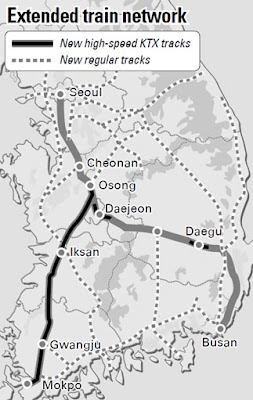 Well, anywhere that isn't on Chejudo (not yet).

The Ministry of Spending Lots of Money on Big Projects has announced that it will spend 88 trillion won (currently about US$81 billion) to expand railway lines dedicated to the high-speed KTX trains:


The government plans to expand the amount of tracks dedicated to KTX trains, which can travel over 230 kilometers per hour, to 2,362.4 kilometers by 2020 from the current 368.5 kilometers. Currently, KTX trains run on the dedicated tracks and normal tracks, on which they have to slow their speeds.

That 230 kph sounds a bit off. My past experience on them clocked in at over 300 kph. Maybe they're talking about an average speed (including accelerating and decelerating).

Email ThisBlogThis!Share to TwitterShare to FacebookShare to Pinterest
Labels: KTX