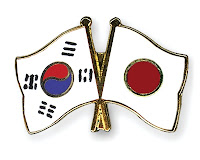 It seems Japan is suggesting a stronger military alliance with the US and South Korea in order to counter the growing threat from China.


Japan's defence minister said his country needs stronger military ties with the US and South Korea to balance China's growing might, the Wall Street Journal reported.

In an interview with the paper, Defence Minister Toshimi Kitazawa said relations with the United States were strengthened by the help its military provided in the aftermath of the March 11 earthquake and tsunami.

"Our priority is to make our bilateral relationship with the US rock solid," he told the paper.

"In order to maintain the right balance in our relationship with China, we need to also solidify the ties between Japan, the US and South Korea," said Kitazawa, of the centre-left Democratic Party of Japan.

This is something that has been in the works for some time already, and it's nice to see it coming to fruition.

Okay, I'm all for a very strong Tokyo-Seoul-Washington-(Taipei) alliance. So can you please stop claiming Tokto already?

Try this for a solution:


Japan officially acknowledges South Korea’s claim on Tokto while South Korea tacitly acknowledges Japan’s EEZ claim around Okinotorishima. This would tick off China, so it has to be done when Korea doesn’t care about ticking off China, or they need to tick them off as a tactical move (like in response to China rounding up North Koreans).

South Korea would, of course, maintain the 12-nautical mile territorial waters around Tokto, but it already does now anyway.

My point is that if the Tokto issue could be resolved and Japan's politicians can manage to hold their tongue on, say, Comfort Women being volunteers and Imperial Japan having been a wonderful influence on Korea, the two could be close allies, like France and Germany today.