There was a time when Pyongyang's threats to rain fire down on the South Korean capital, their claims that such-and-such by Seoul or Washington was an "act of war" that would be responded to in kind, or their other various forms of menacing behavior was just so much bluster: it was a de rigueur for North Korea's mouthpieces to regularly threaten the neighbors to the south.

That was, of course, before the sinking of the Ch'ŏnan last spring, killing dozens of ROK seamen, and then the shelling of Yŏnpyŏng-do Island last fall, which killed ROK military personnel and two civilians. 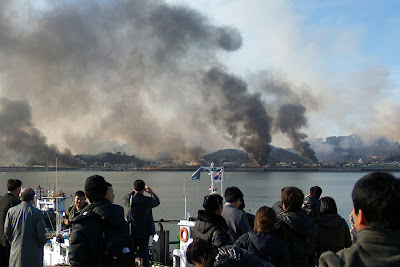 Now that the envelope has been pushed, one wonders if we should take threats like these a little more seriously:


North Korea warned yesterday that it will launch full-fledged attacks against people sending propaganda leaflets over the border, and it won’t give any advance warnings.

The threat to anti-North Korea campaigns by South Korean activists came amid rising hopes that the two Koreas will join China, Russia, the United States and Japan to revive the stalled six-party talks on the North’s nuclear weapons program.

“Under this situation, our army officially informs the south side that it will expand the scope of direct fire, already declared, into full-scale destruction fire at any area, any time,” said the North Korean military in a report from the state-run Korean Central News Agency.

In March, the North said through Korean Central Television that it was losing patience with groups sending propaganda leaflets via balloons across the border and would open fire on certain South Korean sites used to launch the balloons.

They are talking about anti-Kim Jong-il leaflets containing news of the Jasmine Revolution in the Middle East, along with dollar bills and DVDs, being floated over North Korean territory as a way to erode confidence in the regime. Pyongyang has made no secret that it is angry about the leaflets, which it considers psyops and therefore an "act of war." In fact, they have made threats in February and in March that they may attack these positions.

While I'm not saying that these leaflets shouldn't be sent out, I do think it is prudent to expect that North Korean might make good on its threat, with at least one or two shells lobbed in that direction (too many might invite a serious response from the Lee Myungbak administration, which is reeling from anger over its milquetoast response to the shelling last fall).

North Korea's have comfortably lowered the threshold at which they would act, and that alone should have us on guard. Moreover, the way North Korea is talking about this may indicate they are making a case (for their own people at least) why such an attack is not only justified but necessary. Here's North Korea's Central News Agency (KCNA) report on the same news above (朝鮮語):


The south side is persisting in the dirty action of scattering anti-DPRK leaflets, despite the north side's repeated warnings, while committing such reckless military provocations as firing bullets at it.

It scattered more than 200,000 leaflets at Rimjin Pavilion in Phaju City on April 15 and 1.2 million around Samgot-ri, Jung-myon, Ryonchon County in the central sector of the front on April 14, stealthily acting like a cat burglar for fear of merciless counteraction by the army of the DPRK.

It also perpetrated unpardonable military provocation such as firing 12.7 mm large-calibre machine gun in direction of the north side at random from 516 gendarme post at 19:38 on April 15.

Those facts prove that the present puppet authorities are getting evermore pronounced in the bellicose stand to escalate the north-south confrontation and finally bring the situation to the brink of war, the head of the north side pointed out.

Then he solemnly notified the following principled stand of the Korean People's Army:
As already and evidently clarified, leaflet scattering is a form of psychological warfare and it is just a clear-cut war provocation to a warring side.

Accordingly, it is our invariable stand that direct fire at the area where leaflets are let fly will be a legitimate punishment by the army of the DPRK, a warring side, to the breakers of the Armistice Agreement.

Moreover, the south side resorts to scattering of leaflets, moving places in a cunning way for fear of counteraction by our army. Under this situation, our army officially informs the south side that it will expand the scope of direct fire, already declared, into full-scale destruction fire at any area anytime.

Indeed, the KCNA story is a far more ominous read, for it combines the following elements: (a) a declaration that they consider leaflet spreading psyops and therefore an act of war, (b) an official warning of retaliation for said act of war, and most gravely, (c) a concomitant shooting incident that bolsters the case. That last one, left out of the English-language reports in South Korea and the Western media, may seal the deal by providing pretext.

The Pyongyang regime is starting to feel under siege, with much of the population outside the capital feeling very disgruntled following the Great Currency Obliteration of 2009 and the deprivation that followed. Simply put, the leaflet launchings make it harder for them to keep the people in line (which is one of the reasons for doing the leaflet launching in the first place!), perhaps to the point that the regime is under threat itself, and they have to do something. 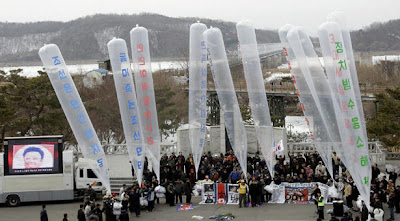 It's no wonder, then, that some residents of P'aju (written as Phaju in the KCNA article) in the northern part of South Korea, are annoyed that the activists are launching the balloons from their neighborhoods. North Korea has recently demonstrated that they have no qualms about shelling civilian targets, and they could be next.

Now, this is not to say that the leaflets should not be sent. I'm sounding the alarm for preparation more than anything else. Perhaps also the leaflet-launching groups could pick some more isolated areas and perhaps even a maritime location (though I have no idea how feasible this is).

I'm just saying: This could get very, very ugly in the near term.

UPDATE:
This doesn't bode well. Apparently Kim Jong-il has paid a recent visit to the government agency that is responsible for the attack on the Ch'ŏnan.