When Yang had his idea 11 years ago, Seoul had a large number of small mom-and-pop bathhouses, most of which closed by 10 p.m. When Yang opened a chain of six mammoth bathhouses, he changed the way South Koreans spent their leisure hours. 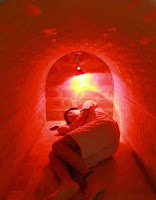 His idea of one-stop leisure not only brought more families out for a soak and a steam, but the practice also became popular for dating singles. Others soon followed his lead. Today hundreds of similar facilities dot the nation.

In a country where strangers rarely speak, the mega-bathhouse has become the great equalizer in South Korean society. In the bathhouse, everyone is dressed in the same utilitarian outfit.

"Customers come to the bathhouse and go through a simple transformation. By taking a complete bath and wearing uniforms, they immediately become a part of this strange world," said sociologist Kim Chan-ho, an associate professor at Seoul's Sungkonghoe University. "By being in the same outfit hanging out on the floor, people feel at ease. Here the hierarchy disappears and everyone is on the same level."

The newfound togetherness even extends to sleeping in bunkhouse-style overnight quarters.

"Sleeping is a very private act," Kim said. "And it's almost eerie to be sharing that private moment with complete strangers, but that is one of the charms of these bathhouses."

The article notes that the aforementioned neighborhood mom-and-pop bathhouses (called mogyokt'ang, 목욕탕) are dying out as a result. That's quite sad, as the neighborhood public bath has often been a central meeting place in East Asian countries where the practice is the norm. (One of my urban development professors tells me that when developers in Japan wanted to buy out a neighborhood where they thought the residents may be unwilling to sell, the first thing they would do was purchase and then close down the local public bath.)

I'd also like to note that Korean-style super spas are becoming a thing in places with a large kyopo population, such as Orange County and Los Angeles. John Travolta and a host of other celebrities are known to frequent a Korean-run establishment called Lions Spa on Pico.

Um, that last link notwithstanding, back in Korea that is not — emphatically not — what the whole spa craze is all about. There are red light districts for the sex stuff, so the super spas are family fun (although in my first experience using a jimjilbang for overnight accommodations, a couple was — as quietly as possible — having sex in the corner of the crowded open sleeping area at about 2 or 3 a.m.). To be sure there may be some monkey business on occasion, but far and away mostly not. That's simply not the association in Korea.

Email ThisBlogThis!Share to TwitterShare to FacebookShare to Pinterest
Labels: jimjilbang