Sakong Il a good candidate to run the IMF? 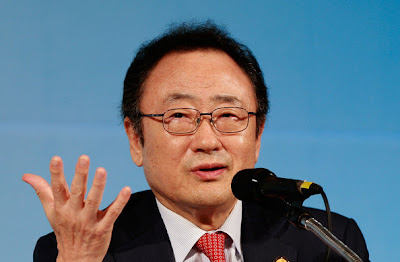 The Korea Times op-ed staff seems to think so. There may be reservations, though:


He has a few barriers to running the Bretton Woods institution, and must get endorsement from the United States and the EU. Another hurdle is UN Secretary General Ban Ki-moon. Other countries could believe that it is not desirable for Koreans to head both the UN and the IMF.

Picking a European as IMF head may be discomforting with the bloc in a deep economic malaise. Will member countries be willing to accept IMF policy recommendations from a European leader when the European economy itself is in trouble?

The United States and Europe desperately need the support of cash-rich China to power the global economy. Beijing may be more sympathetic to a non-European IMF leader than to a European head. It may also know that it has limits in installing a Chinese IMF leader. Its alternative might be an East Asian like SaKong who can better represent the views of the emerging member countries. Unlike former British Premier Gordon Brown, SaKong may enjoy a bipartisan support in Korea for his candidacy.

Maybe it's just me, but KT analysis always has this just-pulled-out-of-my-hangmun feeling to it. I mean, all this speculation may be about as valid as two newbie English teachers deciphering what their academic director is saying to the head custodian.

Anyhoo, if a Korean heads the IMF, I wonder if the kimcheerleaders will have to rethink the "IMF era" label.

Frankly, I don't mind that pejorative label so much, as a lot of the IMF-mandated "reforms" apparently really did make things worse than they otherwise might have been. And it makes for the nice little "I am fired" joke, or its variant, "I am f---ed."

Email ThisBlogThis!Share to TwitterShare to FacebookShare to Pinterest
Labels: IMF