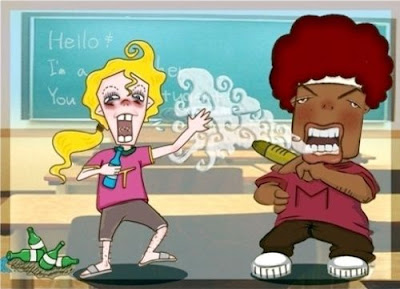 Oh, dear God. The head of Anti-English Spectrum is getting airtime on SBS, allowed to, ahem, air his views. Any thinking person getting a whiff of that air will (hopefully) know the score, but just as there are plenty of folks who believe that, say, Arizona's new anti-illegal immigrant law is not racist in its intent, will not promote racial profiling, and will not have an adverse effects on Hispanics in that state (including those who are legally residing there), I don't have a lot of confidence that people in Korea who are not associated with the target group will get that.

That they are still called upon by national media outlets is a failure on the part of their opponents — including organized entities — to do much beyond griping on blogs or feels-good publicity stunts. Which is why anyone in Korea who does get the get needs to visit the local office of the National Human Rights Commission of Korea [directions are there; please take that link seriously] and file a complaint against Anti-English Spectrum about their hate speech.

Simply put, if the NHRCK determines them to be a hate group, that stain on their credibility seriously erodes their ability to further conduct interviews such as this. I said as much a year ago:


Clearly [AES founder Lee Eun-ung] has enough influence that he's a go-to guy for lazy journalists at the KT and CSI, and insofar as he is apparently running a hate group, that should be put to a stop.

Among the stuff that he acknowledges on his site, what would constitute a hate crime or hate speech? How about in his television appearances or quotes in the printed media?

It's time to make a case against AES to a group like the National Human Rights Commission. Taint them like Acorn, preferably by hoisting him on his own petard.

Getting them labeled as a hate group is one of the things, instead of phony threats made to ATEK leaders, that ATEK should be focusing on. Not getting AES's free speech curtailed so that AES look like victims.

But if they won't do it, then you, local citizen living in South Korea who may or may not even be a native-speaking English teacher, should run with it. Then report back to me. We'll have our dogdam press conference.