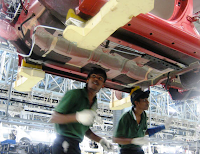 I hope the Wall Street Journal means Chennai in India's south is the nexus of many automakers, not a failed city descending into the depths of demographic hell.

Anyhoo, South Korean car companies are a big part of this "new Detroit":

Hyundai has invested $2 billion here, and recently expanded to be able to produce 650,000 cars a year. It is not only cheap factory-floor labor that attracted the South Korean company, but also an abundance of low-wage engineers to program the robots that help churn out vehicles. ...

The influx of foreigners and foreign money is altering this historic city. In the largely vegetarian region there is little meat for sale. But the Seoul Restaurant is packed with Korean families grilling beef at their tables.

The student population at the Chennai American School has quadrupled to close to 800 as new pupils have arrived from the U.S., Japan, Europe and Korea. A sprawling amusement park across the street from the Hyundai factory, a French bakery, evangelical Korean churches and Japanese grocery stores have popped up in recent years.

Maybe it will inspired a few new English teachers to come to the ROK.