He survived the vuvuzelas, but the Netizens did him in 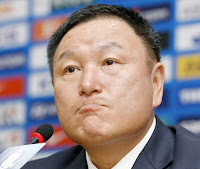 The coach of ROK's national soccer team, Huh Jung-moo, has decided not to seek a second term, citing the malicious behavior of South Korean netizens.


"My family members suffered a lot … I want to have time to recharge myself and spend some time with my family," said Huh whose 30-month coaching contract expires with the end of the World Cup.

The Korea Football Association Chairman Cho Chung-Yun said earlier he had wanted Huh to remain in the job after he successfully guided South Korea through to the final 16 where they were eliminated by Uruguay.

It was South Korea's best performance at any World Cup finals held on foreign soil.

In the group stages South Korea beat Greece 2-0 but suffered a crushing 4-1 defeat to Argentina, which sparked a barrage of cyber attacks on the coach notably over his decision to shuffle his defenders by bringing on Oh Beom-Seok for Cha Du-Ri.

Cha performed well in the match with Greece but Oh made some decisive errors, contributing to Argentina's overwhelming victory.

He is the one in the public eye, but apparently it was his wife who was targeted and got tired of the abuse:


Huh's wife, Choi Mi-Na, told the Chosun Daily that she and their children had been deeply wounded by hurtful Internet postings.

"I told him he should quit … The coach and all my family members have been hurt enough," she said.

Been there, done that (on the receiving end). It's one thing when it's only directed at you (which is bad enough, especially when people are going after your safety, your job, or your public reputation), but when they aim for your spouse and kids or other family members, that's a completely different animal. 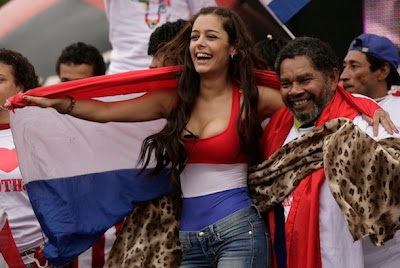 Why can't the get-a-life super comment tribe netizens do something more productive and less malicious, like focus on Paraguay's "Number-one fan," Larissa Riquelme.

Email ThisBlogThis!Share to TwitterShare to FacebookShare to Pinterest
Labels: Are you ready for some futbol?, Larissa Riquelme, netizens