Our Lady of the Oranges: the Diocese of Orange selects an architect for the cathedral

Craig Hartman FAIA (frankly, not sure what that means) has been chosen to design the cathedral for the Diocese of Orange (that would be Orange County's local administration) that has been in the planning stage for quite some time. 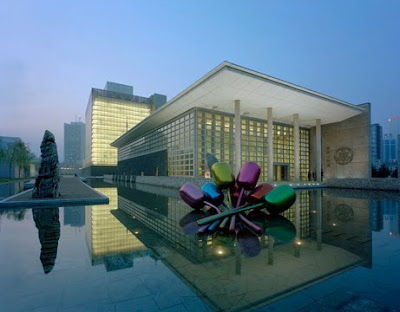 Mr Hartman's other works include the very cool-looking US Embassy in Beijing [above]. He also designed the modern-looking glass structure that is the Cathedral of Christ the Light in Oakland [below]. 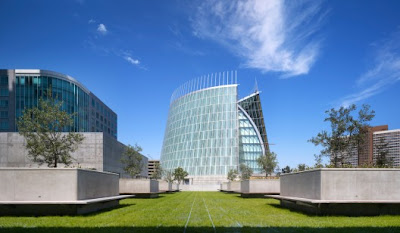 I quite like the modern look of the new Cathedral of our Lady of the Angels in Los Angeles, but I hope Mr Hartman cools it a little with the glass. We already have one Crystal Cathedral in OC and we don't need another.

The new home of Orange County's 1.2 million Roman Catholics (!) is to be built in south Santa Ana, in a place that, I kid you not, was once known as Gospel Swamp.

UPDATE (November 2011):
Well, it's funny I should mention the Crystal Cathedral, since it turns out that the Diocese of Orange went and bought the bankrupt Crystal Cathedral. This may negate any need for a new cathedral to be built.

Chapman University, the top private college in Orange County, was in competition with the diocese, as they wanted to expand their campus. They had promised to let the Protestant-oriented Crystal Cathedral to keep operating for a few years, perhaps as long as two decades, but I believe the whole thing would have been secularized eventually.

The Catholic Church, by contrast, promised it will use the cathedral as a Christ-oriented house of worship, and that's something founder Reverend Robert Schuller had said he wants, whether Catholic or Protestant (in an interview he said he considers the Catholic Church the mother church).

The diocese also may be providing facilities, like nearby St. Callistus Church, in which the Crystal Cathedral congregants can continue to worship. I wonder, though, how many of the congregants will wish to continue attending there when (a) their beloved leader is no longer preaching and (b) they no longer have the inspiring environs of the Crystal Cathedral in which to worship. I'm guessing some might stick around and attend mass.