(UPDATED) Once more, with feeling.

UPDATE:
Whoops! It looks like the Me Lee mentioned below is not the Mr Lee who founded Anti-English Spectrum (see my post and the Popular Gust post that set the record straight).
ORIGINAL POST: 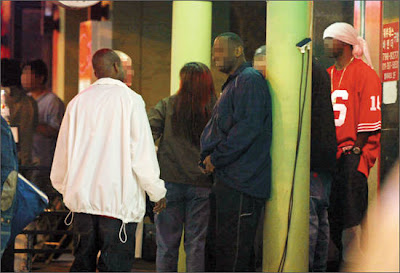 The Marmot reports that Anti-English Spectrum's xenophobically incendiary founder has scored another interview, this time from a minor Internet news outlet, and he really lets loose on some racist views:


But Lee, who looked around the clubs, noticed the foreigners’ intonation, way of speaking and level of vocabulary was strange. When he talked with them, most of them were from underdeveloped former British colonies in Africa and Southwest Asia, or running away after committing crimes in their own countries, or social misfits who were not properly educated. Lee says they told him to his face that “Korean Pussy is Best!” “Best” was a sarcastic way of saying “easy.” Seeing this, Lee said he founded the group to inform people about native English speaking teachers and the seriousness of the English flunkyism raging in our society.

Switch this around and make Lee a gringo railing on darker folks in his midst in order to warn us about illegal and/or unqualified Mexicans, and I'd have a serious problem with this guy (and sadly, that's an awful lot of gringos in OC).

Hmm... what to do... what to do? Oh, maybe get this guy's organization listed as a hate group. What a wonderful idea.

I did find this part interesting...


Because the media isn’t reporting how dangerous Itaewon is, there’s lots of Korean women loitering about Itaewon on a Friday or Saturday night looking to hook up with foreign dudes. Government bodies and civic groups pushing multiculturalism and foreign tourism were blowing off the danger as racist rumor mongering, while journalists — by necessity socially critical — take a sympathetic view of foreigners and deny that any of the nonsense is going on.

... because it underscores the idea that not only is Lee not necessarily representative of the young ajŏshi, but even he believes that his xenophobic views stand contrary to government policy. The Feds are concerned about racism-mongering, they don't particularly mind Korean women hooking up with non-Korean men, etc.

I should add one other thing, and that is that this is not the first time I've heard such thoughts as those in Mr Lee's interview. Particularly in relation to the Nigerians and the Southeast Asians, I have a Gen X English coworker and a Baby Boomer American acquaintance who would frequently say the same things, if not worse.  Of course, that doesn't make what Mr Lee said okay; they were often quite racist themselves.