Still cleaning up in Taean 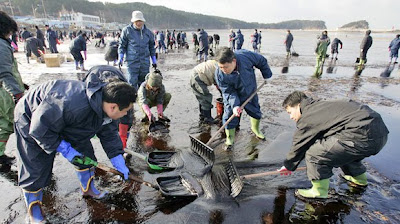 John Glionna of the Los Angeles Times takes a look at T'aean County in South Ch'ungch'ŏng Province, site of the worst oil spill in South Korean history, and suggests it provides a cautionary tale for communities along the Gulf of Mexico who are trying to rebuild after the massive BP oil leak:


The collision dumped 11,000 tons of crude oil — a third of the amount in the Exxon Valdez spill in Alaska and a mere fraction of what the broken BP rig has spewed into the Gulf of Mexico.

Seven thousand miles from the Gulf of Mexico's shores, this tiny town 90 miles southwest of Seoul provides a possible scenario for fishermen and others along the coasts of states such as Alabama and Louisiana who are wondering what the future holds.

Two and a half years after the accident, Taean is a ghost town. Tourism has dropped 86% and has just begun to bounce back. As scientists predict the ecosystem will take at least 20 years to heal, livelihoods that took generations to develop have been cut short. Today, only 30% of the area's nearly 5,000 fishermen are back at work. Many others are scrambling for government loans to see them through the crisis.

Even though BP has already promised a $20-billion compensation package for the gulf, grim-faced Taean residents offer some solemn advice: Take nothing for granted.

Along the same theme, PBS's "Newshour" had a piece on the challenges facing the rehabilitation efforts in Louisiana and other Gulf states, with a heavy focus on the aftermath up in Alaska following the Exxon Valdez spill.

At any rate, the severity, regularity, and seeming inevitability of such accidents really makes me wonder why we take it for granted that oil-based fuel is such a necessity and make so little effort to effect a change in that status quo.