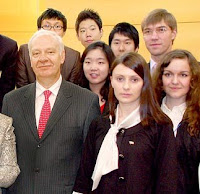 I would prefer to focus on Russian strongman Vladimir Putin's pretty hot-looking daughter visiting Seoul for a Russian-Korean friendly powwow at Koryŏ (Korea) University, but there are more pressing matters in front of us, including my mortgage payment going up.