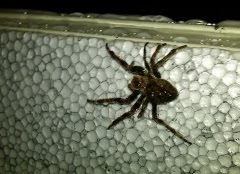 Guam has a thing about creepy-crawly creatures making landfall and invading the island. They're already obsessed with brown tree snakes, so naturally they were concerned about spiders from South Korea:


Guam officials Friday afternoon ordered a commercial ship from South Korea to leave port after thousands of spiders poured out of cargo intended for a construction site where a facility is to be built to house crews that will one day build new U.S. military bases on the island.

The spiders were discovered Wednesday evening, shortly after the ship arrived, officials said. It left the port soon after but moored off the island as officials investigated.

By Friday afternoon, it remained unclear what species the spiders were and whether or not they were venomous or posed any danger to the island. No injuries or bites had been reported, officials said.

The about-face of the M.V. Altavia was issued after the Guam Department of Agriculture ruled the spiders an “invasive species” too numerous to destroy or contain, according to Joseph Torres, the department’s director.

Given the nature of the cargo, one almost wonders if this wasn't sabotage of some kind. I could see a whole bunch of groups — from fifth-column chinboistas who don't want to see their boogie man leave to, well, you name it — who would want to slow up the building of military facilities on Guam designed to take up the slack from Okinawa.

Give me enough time, and I can come up with a conspiracy theory on just about anything.

Email ThisBlogThis!Share to TwitterShare to FacebookShare to Pinterest
Labels: Guam