A former North Korean spy who blew up a South Korean airliner two decades ago killing 115 people has been allowed into Japan.

Kim Hyon-hui will meet the families of Japanese people abducted by North Korea to train its agents.

For the visit to take place Japan has waived immigration rules and police are not expected to question her past use of a fake Japanese passport.

There has been criticism in Japan of the decision to allow Ms Kim's visit. 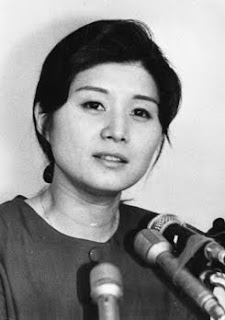 Criticism? Do ya think? This woman — if her story is true — used the kidnapped Japanese to learn Japanese so that she could pose as a Japanese traveler and kill over a hundred people. This latest twist in the saga of this killer who should be behind bars for mass murder just makes things stranger and stranger.

Would the parents of the abductees, particularly Yokota Megumi, even want to meet her? What does she even offer, something that doesn't smell like a publicity stunt of some kind (and yes, this person has written a book)? It seems some in Japan share my skepticism:

However, critics say any information she may have is likely to be decades out of date, and the trip has been branded a stunt to gloss over the government's lack of progress on the abduction issue.

Blech. Her case underscores one of the failings of the South Korean judicial system, whereby the flimsiest of mitigating circumstances is used as a pretext for letting someone off easy or off the hook altogether. In this case, instead of the all-too-familiar "I was drunk" excuse, hers was "I was beautiful."