Being only a moderately popular blogger (I divide blogs according to whether they get hundreds of hits per year, per month, per week, per day, per hour, and per minute, and I'm on the low end of the high side), I don't attract that many trolls, which frees me to write thoughtful posts, give well-considered responses to regular readers' comments, and be a troll on other people's blogs. (That is, when I'm not stuck in the middle of a lot of ducks-in-a-row-getting, like I have been since June and will be until October, hence the lack of a Daily Kor and other regular posting.)

Nevertheless, I thought this graphic, sent by WangKon936 of The Marmot's Hole fame (that's what we call a hat tip, WangK), was amusing enough to post. He got it from this site, which boasts other mildly amusing graphs. I like graphs. 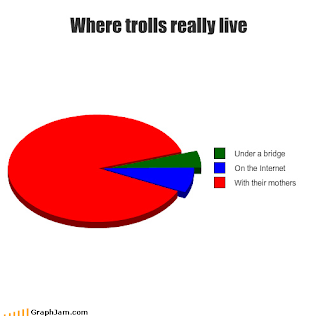