The one where Kushibo sees
Avatar: The Last Airbender

So I go see Avatar: The Last Airbender with some wee ones the other day. And I mean wee, as in preschool and kindergarten, but they have been watching the cartoon series and they're up to speed on what's what, so they enjoyed themselves. So did my mother, who I had thought would think, "What the heck did I spend $9 on that for?"

It was an enjoyable enough film for me, someone who has only occasionally seen some snippets of the series here and there, just enough to know that it's centered around a kid who has the Target generic goods logo on his head. But it was made even more enjoyable because it produced what I hope will be a durable inside joke: As I headed for the restroom after the film was over, I told the adults in my group, "I'm going to do a little waterbending myself." 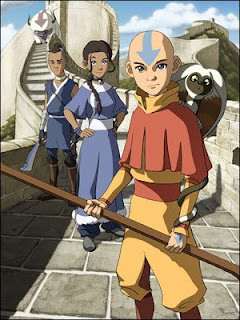 There were no protestors at the showing, even though we were in Los Angeles. Apparently some Asian-American actors and activists are upset because of unfair casting. In short, they're angry that the blue-eyed character from the TV series was played by an actual blue-eyed actress. (Also, the flying buffalo in the background was played by a horse in a fat suit.)

Okay, okay. I'm belittling the argument a bit, but I'll try to present it as objectively as possible. In a nutshell, this animated series with obvious Asian elements and Asian settings and Asian architecture and characters with Asian-sounding names (Sokka? Aang? Not actual names, but they do sound Asian) should have been transformed into a live-action movie only with Asian actors. Not people like Nicola Peltz, the aforementioned blue-eyed monster. There are precious few acting roles for Asian-Americans (or Asian-Canadians) and so M. Night Shyamalan really screwed the lemur on this one by casting so many non-Asian people.

Oh, that devilish M. Night Shyamalan. Perhaps they don't realize he himself was born in Asia (Pondicherry, India, to be precise) and they're of the mistaken belief he's just a guido from Jersey who spent way too much time at the tanning salon. What else could be the source of all this rage? It's only July. You can't be bored already?

But I have news for you... take a look at the characters in the cartoon. Do any of them have a compellingly East Asian look to them? They're standing on the Great Wall of, apparently, China, but anyone can do that. It doesn't make them East Asian. That's an external clue, the kind that makes people think they can tell ethnicity — like distinguishing Japanese from Korean — when what they're doing is not using facial structure but hairstyle, makeup, or clothing to make their decision.

In fact, I'd say they look more Hispanic or South Asian, which may be the reason the fire bender actors look so heavily, well, South Asian (though the actor playing the Lord Fire Bender, Cliff Curtis, is actually Maori, the Polynesians from New Zealand).

Look, these Last Airbender actors are not White people with tape over their eyelids starring as Chinese peasants. Or Mr Mikiruni as Mr Yunioshi. Rather, they are an ethnically diverse set of actors playing ethnically vague characters from a fictitious land. (You show me Firebendia on the frickin' map and maybe I'll change my tune.)

Did I mention that Kushibo has the ability to travel to alternate universes to see how things might have panned out? Because that's what I did. I managed to get into a parallel reality where Mako was made director of this film and he nepotistically cast all his relatives. And the fine agitator folks at racebending.com instead called their site JapinFetchit.com and bemoaned something else entirely:


Oh, my God! Do we have to witness another film where Asian actors are cast into stereotypical roles where they're all mystical and do martial arts poses and live in temple-like settings?

Why is mainstream America afraid of putting Asian-American actors into normal roles playing everyday people that would demystify their existence as Americans, instead confining them to yin-yang spouting philosophers with lines like they work in a Chinese fortune cookie factory cribbing pages from the Dialects of Confucius?

But what else can we expect from an ostensibly Asian animated story created by two White guys?

By the way, it's Analects of Confucius, you doofuses (doofi?), but in that parallel universe, Kushibo doesn't give a rat's ass about saving people from making themselves look stupid.

Oh, did I mention that Airbender is the creation not of a Japanese animation studio, a Korean cinema company, or any other Asian entity? It's two White guys. Who created round-eyed characters. There is no ethnicity to them. In fact, put an arrow on Michael Dante DiMartino's head and he could be Aang.

All together now: There is no ethnicity to them.

Now put down your pickets and go watch Toy Story.

Email ThisBlogThis!Share to TwitterShare to FacebookShare to Pinterest
Labels: the other Avatar