Steve Jobs is going to buy me a bumper, and something about what if Apple were Korean

The big news conference on Friday at 10 a.m. PDT (2 a.m. on Saturday, Korea time) held a few important bits of information. First, the white iPhone 4 will be available on July 30, which means I may consider plotting how to return my black iPhone 4 by July 29 (the thirtieth day since I bought it and the last day to return it) and then get the white one I had wanted in the first place the following day.

It was also announced that Steve Jobs owes me twenty-nine bucks, for the black/gray bumper I bought so that I could lay the iPhone 4 on a flat surface without worrying about the thirty-times-stronger-than-plastic surface getting scratched, and also so that I wouldn't accidentally drop all my calls when I'm on the Interstate or hiking toward Kaena Point or toward Makapu'u to see the whales. 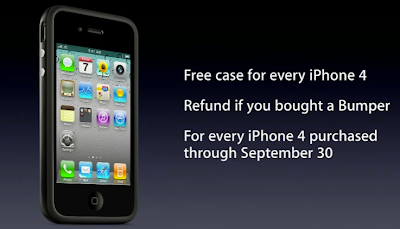 It was a mea culpa of sorts, but the unwashed masses thought Steve Jobs wasn't contrite enough, especially when he insinuated that people were picking on and nitpicking at Apple now that it was on top. And what was interesting was the way he said it:


Maybe it's human nature — when you're doing well, people want to tear you down. I see it happening with Google, people trying to tear them down. And I don't understand it. What would you prefer? That we were a Korean company, [or] that we were here in America leading the world with these products? Maybe it's just that people want to get eyeballs on their sites. We've been around for 34 years... haven't we earned the credibility and the trust of the press?

The Korea reference aside, that kind of tu quoque argument you're-picking-on-us-unfairly talk sounds very much like something coming from the PR wing of an overly sensitive Korean entity after a round of bad press in the blogs.

There are a few other things I could say about that, including that there is a lot of Korean product built into these things, but yeah, Steve Jobs has a point that you don't see as much scrutiny about Samsung or LG phones, though there are far fewer Samsung and LG fanboys which draw the ire of everyone else enough to have their beloved products taken down a peg.

Anyhoo, the other bit of news is that I was wrong about this post. Steve Jobs removed South Korea from the list of countries that would receive the iPhone 4 in July, "cuz it's going to take us a little longer to get government approval there," Mr Jobs said.

The entire conference can be viewed in high-resolution Quicktime here.

UPDATE:
People in South Korea are not happy about the iPhone 4 delay, not just because Korea was taken off the list, but also because the reason sounds insulting and bogus.

UPDATE 2 (September 5, 2010):
Korea Telecom (KT) has just announced an iPhone 4 release date of Friday, September 10. We're going to hold them to that.