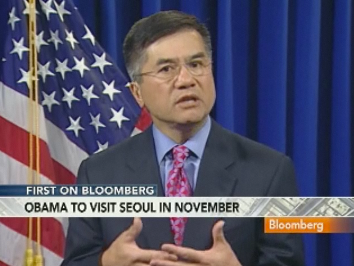 Related to this story, US Commerce Secretary was interviewed by Bloomberg, during which he talked up (just after 3:30) the importance of the KORUS FTA. Actually, he's talking up all the waiting-in-the-wings FTAs (including Panama and Colombia), but the one with South Korea seems to be the most significant given its size, the potential payoff, and the relative lack of thorniness.

But if there's one thing I've learned while watching "Lost," it's that you shouldn't completely trust anyone named Locke, and sure enough, he starts in with the same Obama fiction about US trade with South Korea that the president and other Democrats peddled with the unions in order to get support. To wit:


In Korea, the President is going to Korea in November. He would like this finalized, an agreement ready to be submitted to the Congress, by the time he goes to Korea. So that is a top priority.

But the big problem with Korea is that the Koreans have excluded American automobile parts, as well as American automobiles. Severe restrictions on the amount of American auto and auto parts that can go into Korea. We need to make sure that there's a level playing field for US businesses.

You know, the United States is so open to foreign products coming into the United States. And as the President said today, we in America expect fair treatment. Same, reciprocal treatment with respect to our goods that are then able to be sold into those other countries.

I think Secretary Locke is being disingenuous. He talked of the myth that these trade agreements (plural) "had bows wrapped around them, ready to be delivered to the Congress." While Panama and Colombia may have had kinks to work out, the KORUS FTA was ready to go; it was Obama's own political calculus that saw the need to pander to some of the leftist or anti-business factions of the Democratic Party.

And part of that pandering is the fiction repeated above. Detroit and a number of unions have been acting as if we're stuck two decades ago. They talk about things that got resolved after the WTO and the Uruguay Round — things like the automatic audits on those who bought foreign cars — as if they are still going on. That's on top of the fiction in the earlier link where US-made Hyundai and Kia automobiles are counted as Korean while Korea-made GM vehicles are as Korean, giving a tremendous distortion in the number of American cars sold in Korea versus the number of Korean cars sold in America.

And then there's the illogical idea that because trade is not fair we must not ratify a free-trade agreement. Isn't the FTA meant to be a means to resolve the problems you perceive to exist. Get this ratified now and then work on tweaking whatever's wrong with it.

I honestly never thought I'd see the day when it was the South Korean government insisting that a major agreement be followed while the US side insisted on renegotiating it after it was signed. Lee Myungbak seriously went to bat to get this signed — pandering to Washington by ignoring reasonable health concerns about American beef was what triggered the Mad Cow protests that gave the chinboistas the ammunition they needed to make a serious run at ousting their arch enemy — and Obama and Montana's US Senator Max Baucus have left him twisting in the wind.

Clearly the White House is going to need serious Republican support for KORUS, just as President Clinton needed GOP Senators to pass NAFTA, but if this doesn't eventually pass, I will point the finger at Obama himself for this ham-handed handling of such an important issue. I dare say I would end my Democratic Party affiliation.

Email ThisBlogThis!Share to TwitterShare to FacebookShare to Pinterest
Labels: FTA