I personally recognize September 17, 1787, as the birth of the United States of America, but I will join millions of others across the county to spend the 234th anniversary of the signing of the Declaration of Independence by participating in a large family gathering (though not my own family) eating barbecue and watching fireworks. 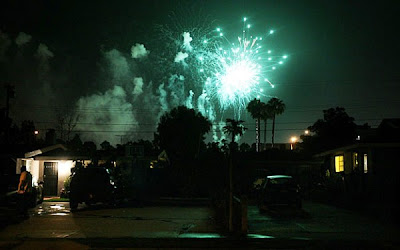 But I always wondered if those in the proximity of Disneyland's daily fireworks display or Waikiki's semi-weekly fireworks display felt that such shows diminish their enjoyment of pyrotechnics when we celebrate our nation's birth. The answer is yes, sort of:


Juanita Driskell, a retired teacher who has lived a few blocks from the Anaheim theme park for nearly three decades, is so accustomed to the fireworks that when the crackling and hissing starts around 9:30 p.m., she just cranks up the volume on the television. Her two cats hardly bat an eye.

» Don't miss a thing. Get breaking news alerts delivered to your inbox.

"The good part is I don't have to leave the living room to see fireworks," Driskell said. "The bad part is that it's so loud."

And when the grandkids visit, she has free entertainment to offer, ushering them to the patio to take in the spectacle, eyes skyward.

Driskell's experience is typical of the love-hate relationship residents have with the 250 fireworks displays Disneyland stages annually.

Though many in proximity to the resort admit there is an appeal to the radiant bursts that fill the night sky on weekends, holidays and throughout the summer, those in pursuit of peace and quiet have tried for more than a decade to limit the noise and smoke.

Last year, one resident sued Anaheim in federal court, saying that by holding hundreds of fireworks displays at the park each year, the city was violating federal water pollution laws. The suit was dismissed, but residents remain concerned about environmental issues.

It's no Vieques or Maehyang-ni, but I could see where people might get annoyed. My uncle, though, would say these unpatriotic residents should be waterboarded.

Email ThisBlogThis!Share to TwitterShare to FacebookShare to Pinterest
Labels: Disneyland