Formula One racetrack is "on track" to open in August

That goofy pun courtesy of AFP:


South Korea aims to complete work by late August on the track for its first Formula One race, a month later than scheduled, organisers said Wednesday.

The 5.6-kilometre (3.5-mile) track at Yeongam, 320 kilometres south of Seoul, will be ready by the end of next month at the latest, the Korea Auto Valley Operation (KAVO) said.

"Our initial plan was to complete it in July but construction has been delayed," a KAVO official told AFP, declining to give details.

KAVO, a joint venture between a private firm and the provincial government, is building the circuit for the Korean Grand Prix on October 24, which will be the 17th leg of the 19-race season.

I have mixed feelings about things like this. On the one hand, racetracks are like golf courses in that they can be huge wastes of land that cause more environmental impact than they should. On the other hand, however, anything that provides jobs and development outside of Seoul — particularly in the Chŏlla region — and a reason for capital residents to leave the city is a good thing, I s'pose.

I wonder if they will hit their target of two hundred thousand Korean and international visitors. They'll have to make it awfully easy for people to get there if they want those kinds of numbers, but I guess train service is pretty good. 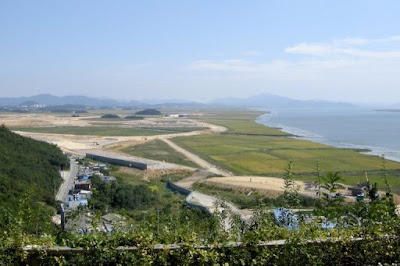 It will be kind of cool to watch cars zip along the coast, and that "longest straight stretch in Asia" may come in handy for television commercials and test drives, and may even inspire some more musculature among the local automakers.