So this cold is not my imagination 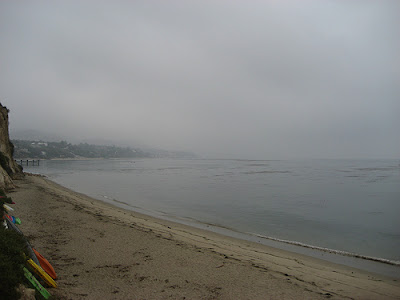 In Southern California, ever since I was a kid, we've typically had unusual late spring and early summer weather that would seem most atypical for Southern California: chilly temperatures owing to cloud cover from the ocean. There's no humidity and the clouds never release any rain. They sometimes, but by no means always, burn off by early afternoon, but when they don't, the chill lasts all day long and into the night. [photo source]

If they leave, the clouds almost always return sometime in the night, but even before then, the evening can be a little windy and even downright cold. Each of the past three summers, I've gone to a Major League Baseball game in Los Angeles, Anaheim (Orange County), or San Diego, and even with a hoodie, I felt uncomfortably cold by the seventh inning.

It is called June Gloom (as well as May Gray), and it starts in April or May and usually lasts until the very beginning of July (the Fourth of July is the day we declare independence from this tyrannical weather). When friends or relatives drop in from back east, they joke that they should demand a refund. It's too cold to go to the beach, or at least get in the water (although even on a hot day, the water off California is pretty danged chilly, which would explain the popularity of sunbathing). 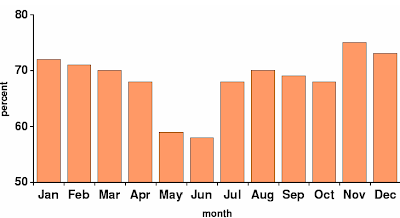 [above: A graph of percent of possible sunshine each month (source)]
I was starting to wonder if it was all my imagination. I don't mind the cold winters of Seoul; in fact, I find them invigorating. But there's heat everywhere. By contrast, when it gets "cold" in Hawaii or California — prolonged temperatures in the 50s or lower — I feel it differently because there's no respite from it, particularly in Hawaii where buildings usually do not even have a heating system.

And the other day, I looked on my iPhone and the temperature in Barrow, Alaska, America's northernmost community, was only five degrees (Celsius) colder than Orange County.

But the Los Angeles Times assures me that it is not my imagination: Los Angeles (LAX, at least) is experiencing record cold high temperatures. And it seems it's been going on for a while. We actually saw snow on the upper reaches of the northern slope of the San Gabriel Mountains (Mt San Antonio, aka Mt Baldy, I think) from a stretch of Interstate 15 called the Mojave Freeway on the trip up to Las Vegas, and even Mt Charleston in Clark County, Nevada, still had some snow... an extreme rarity in June. 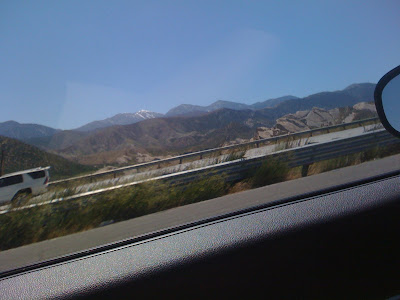 Ah, but it will eventually warm up, and then the scorching heat of summer will, in typical skewed-calendar fashion, last until October. Unfortunately, we don't have a nifty little name for that, like "June Gloom." Might I suggest Septemburn and Octoburn? 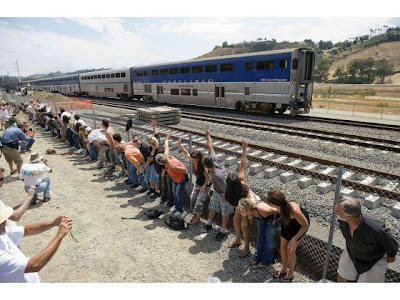 UPDATE:
The sun did come out long enough for protestors activists really bored barflies to moon the Amtrak Pacific Surfliner down in Laguna Hills.

Email ThisBlogThis!Share to TwitterShare to FacebookShare to Pinterest
Labels: weather