Are you ready for some (Western movie about) football? (UPDATED) 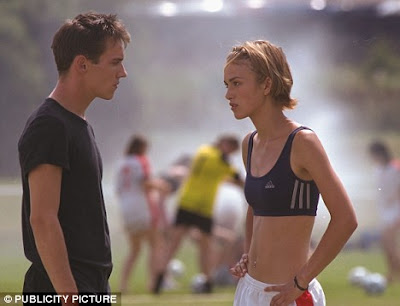 The latest from Pyongyang is that North Korean television broadcast the 2002 hit movie, Bend It Like Beckham on Boxing Day (December 26). This was reported by none other than Martin Uden, the British ambassador to South Korea, who happened to be in North Korea that day (note to Sarah Palin: North Korea is the evil one, unless you're China; it's the US and its nasty little Civil War that has "the North" as the good guys and "the South" as the bad guys, though I half-suspect knowing that is not what got Ms Palin confused).


But on Sunday, The Associated Press reported, North Korean television audiences were given a rare break from this routine when the British comedy “Bend It Like Beckham” was shown there. The film, which stars Parminder Nagra as a young woman from a Sikh family with dreams of soccer stardom; Keira Knightley as her best friend; and Jonathan Rhys Meyers as the dreamy coach they both have eyes on, was shown over the weekend by the arrangement of the British Embassy. According to the BBC, a message was shown during the film saying that the broadcast was done to mark the 10th anniversary of diplomatic ties between North Korea and Britain.

Well, I'll say that this is one sure sign why it's important to have some diplomatic ties with the likes of the Pyongyang regime: Without the British ambassador tweeting about his nightly schedule, how else would we know about such groundbreaking sociopolitical events in a land where TV Guide fears to tread?

One wonders what the average North Korean must have been thinking when they saw a bunch of Westerners — without horns, even! — in the role of protagonist. This could be a game changer for the elite in Pyongyang who may see this as a signal that the West is no longer an enemy to be dehumanized. Not sure what the people in the provinces think of it, if they saw it at all.

Despite my skepticism about the rise of Kim Jong-il's third son, I concede that this may be a sign that the ascension of Kim Jong-un is in full force. Plucked from a ski lodge in Switzerland, Kim Jong-un has prolly been sitting around Glorious Palace #4 going, "This place is boring and there's nothing on TV!" to which a few dozen handlers and sycophants responded by getting the least offensive Western movie they could find that had girls in it. When the last eight minutes of the movie — the part where the heroines of the movie fulfill their dream of moving to America — is cut, it's a fine film suitable for the people and the revolution.

And while we're at it... just how do we know this was Bend It Like Beckham the movie? Wouldn't it be just like the Dear Leader — addicted as he is to multitudes of forced labor so he can have shows like the Arirang Games — to stage an entire re-enactment of the movie with live actors.

(Hmm... I was kidding about that, but now it has me thinking... we haven't seen Parminder Nagra since "ER" ended.)

The implications of this first-ever showing of a live-action Western film are endless. Why this film? Why not Raiders of the Lost Ark or Escape to Witch Mountain? Why any Western film? Why now?

Television has supplanted religion as the opiate of the masses, and the regime may have decided that pre-approved Western pop culture may be the most effective way to win back hearts and eyeballs that have grown tired of news reports glorifying the Dear Leader and are instead watching bootleg DVDs smuggled in across the Yalu.

Why BILB? Perhaps it reinforces the idea of sticking to conservative family values and hard work in the face of decadent American culture (though it also encourages emigrating as fast as possible from your own repressive culture).

It also may be intended to shatter stereotypes of Westerners living lives of luxury. Like many North Koreans, the Keira Knightley character is malnourished to the point of having the breasts of a boy. Not to mention the butt of someone with no butt.

And of course we must hold out the possibility that the choice of movie was just a colossal misunderstanding: The authorities may have thought Bend It Like Beckham was some sort of torture manual.

UPDATE:
I should have done my post on this the moment I saw the story instead of some days later. By then I got confused about where Ambassador Martin Uden was when he tweeted this (I've crossed out my incorrect interpretation above). In this new UK Foreign Office blog piece he talks a bit more about the development.