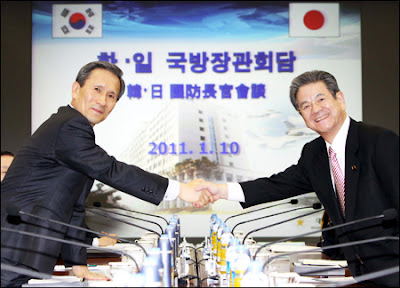 Has North Korean hijinks pushed Seoul and Tokyo to do something Beijing once thought unimaginable, a ROK-Japan military partnership? Sure, South Korea and Japan have both long been aligned with Washington, but now it looks like Pyongyang may actually be creating a real headache for China such that it can no longer turn a blind eye. Maybe. 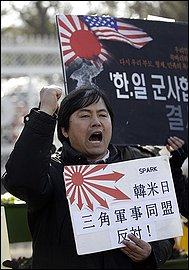 Of course, any "trilateral" alliance would be opposed by the chinboistas, some of whom get their own marching orders from Pyongyang, so expect rallies like the one at right. With signs in perfect Japanese, held by someone who's ostensibly anti-Japan. Gee, I wonder who helped him make his sign.