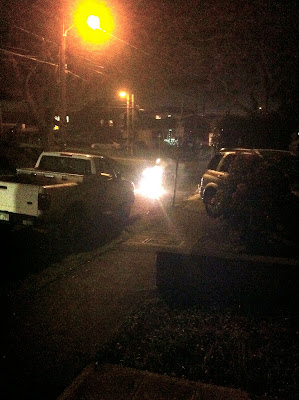 Kushibo is turning into an old fogey, I guess. This is my first New Years in Honolulu and I'm starting to regret it already. Apparently the good people of Honolulu celebrate the new year by taking illegal fireworks — noisy and dangerous illegal fireworks — and light them off for hours and hours before the clock strikes midnight (and who knows how long afterward).

It's only 10 p.m., but this has already been going on for hours. And if it were only just like Fourth of July in Orange County, I wouldn't complain, but the noise is non-stop and I can't even work. Various people keep lighting off minor explosives with enough concussion to set off car alarms nearby. I'm not joking about that; it has happened at least ten times on this street since 7 p.m. This is a residential area, not some busy party zone (we are thinking of heading to Waikiki for the seaside fireworks).

Mind you, all of this is illegal, yet nobody is doing anything about it, and apparently a lot of people think it's perfectly okay. It has prompted a study partner, "M," who is from Japan, to remark that, "New Years is an excuse for Americans to do whatever they want."

Perhaps. I guess at twenty-four, she's an old fogey as well. In Japan (or at least her part of Japan), the new year is rung in somewhat quietly. In Korea, too, if you want the noise and excitement, you go and find it. Here in Honolulu, it finds you.

Maybe I'm being too sensitive to this, but it has really gotten on my nerves. I can't work anymore. Loud explosions keep going off overhead and up and down the street. There is a thick layer of smoke hovering in the air, with a chemical stink. It's like a war zone, minus the dead bodies (but there are a few crying babies and shell-shocked kids and adults).

Oh, look, someone has lit a fire and launched it from a balloon. It's now heading over Interstate H1.

UPDATE (January 1, 2011 Hawaii time):
I was a bit wrong about all the fireworks being illegal now. The sweeping ban starts January 1, 2011, so some apparently were still legal before midnight last night (but the loud booming ones were illegal then as well, according to the police I talked to). Much of the craziness last night with all the neighborhood pyrotechnics was because it was a last hurrah. Having never been in Honolulu for New Years, I had no idea if last night's shenanigans was typical, but a few told me it was a bit more than usual. But only a bit.