I had given serious thought to visiting this year's Computer Electronics Show (CES) in Las Vegas, since I would have been visiting relatives there anyway. But alas, Kushibo got too busy and was already too poor, so I stayed in Honolulu and roasted in 80° weather instead. 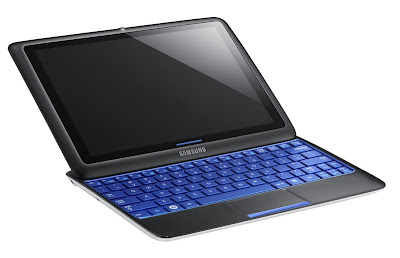 But had I gone, I might have seen Samsung's new Series 7 tablet, which looks like it is taking serious aim at the iPad.

The Series 7 tablet, with its keyboard, is looking to capture spending dollars from consumers who aren't sure whether they want a tablet or a netbook, offering a few features of each.

An almost iPad-sized 10.1-inch touch screen, with a resolution of 1366 x 768 pixels, sits on top of the tablet's keyboard, which, once exposed, allows the screen to lock into place, making the device look much like a netbook.

The truth is I wouldn't buy a non-Macintosh unless there were a way to run MacOS on it (and the nice folks at the Apple Store would somehow service it). In fact, my next computer will likely be an 11-inch MacBook Air, which satisfies my desire for an ultra-lite portable computer, as long as I still have my iMac back in the residential unit to act as a home base. But I had also considered getting an iPad and a bluetooth keyboard instead, and this latest from Samsung seems to have successfully melded some of the best aspects of those two experiences. Were I in the market for a Windows machine, this would be one I'd take a serious look at. And no, no one paid me to say that.