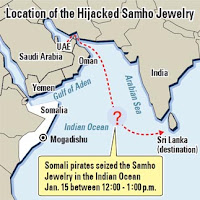 I guess in Somali algebra, ROK = ATM. Yet another freighter (read: not a fishing boat that can be claimed to have been poaching in Somali waters) has been hijacked by Somali pirates. For once I'd like to see some ROK Marines take over the vessel (but not if it means getting the hostages killed... I guess it's not that easy... maybe that's why this hostage-taking and hijacking is so profitable, I s'pose).

Meanwhile, here's a bit of good news from the Korean War, which ended 57-1/2 years ago: two Filipino soldiers declared missing since the Forgotten War have been found, alive. They are 81-year-old Francisco Salac, 81 and 83-year-old Victoriano Manalastas. Not sure what to make of that.