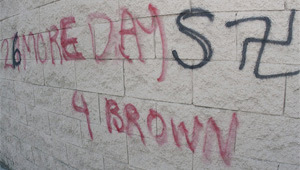 That's the apparent message from graffiti found in Orange County this week. Readers of Monster Island are no doubt aware that the symbol above is not the Nazi swastika but the Hindu swastika. Perhaps the Hindus are angry that Governor Jerry Brown spent some of his inter-Sacramento years studying Buddhism in Japan instead of Hinduism in India. 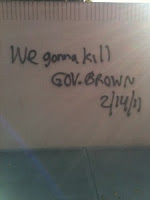 Or maybe it's Christians pretending to be Hindus threatening to kill Jerry Brown on February 14 to protest how Christmas has turned into a second Valentine's Day in places like Japan and South Korea.

Or maybe it's Hispanics in Santa Ana (incorrectly) using the swastika as a White power symbol to make it look like the Tea Party folks are threatening the governor.