Peaceful reunification of the Korean Peninsula — defined in practical terms as Beijing pulling the plug on its support for the Pyongyang regime and allowing Seoul to absorb the DPRK without incident or interference — may have just gotten a lot harder. For the first time since 1994, China will station troops in North Korea, to protect the port facilities it is developing in Rasŏn (also known as Rajin or Najin).


China is in discussions with North Korea about stationing its troops in the isolated state for the first time since 1994, a South Korean newspaper reported Saturday.

The Chosun Ilbo newspaper quoted an anonymous official at the presidential Blue House as saying that Beijing and Pyongyang recently discussed details of stationing Chinese soldiers in the North's northeastern city of Rason.

The official said the soldiers would protect Chinese port facilities, but the location also gives access to the Sea of Japan (East Sea), while a senior security official was quoted as saying it would allow China to intervene in case of North Korean instability.

A spokeswoman for the Blue House said she had no information, while China's defence ministry declined comment to AFP on the matter this week.

"North Korea and China have discussed the issue of stationing a small number of Chinese troops to protect China-invested port facilities" in the Rason special economic zone, the unnamed official was quoted as saying.

"The presence of Chinese troops is apparently to guard facilities and protect Chinese nationals."

China reportedly gained rights in 2008 to use a pier at Rason, securing access to the Sea of Japan (East Sea), as North Korea's dependence on Beijing continues to grow amid a nuclear stand-off with the United States and its allies.

The last Chinese troops left the North in 1994, when Beijing withdrew from the Military Armistice Commission that supervises the truce that ended the 1950-53 Korean war.

I couldn't find the Chosun Ilbo article they were talking about in English or in Korean [UPDATE: Destination Pyongyang has a Korean-language link in their excellent treatment of this news, and the Chosun Ilbo now has the story in English]. And I'm quite curious how many constitutes "a small number." In a nation of 1.3 billion, who knows?

We've already talked about development of these port facilities and the multi-billion-dollar economic package of which they are a part, what I call the "Manchurianization of North Korea." As a crucial element of its own attempt to reform North Korea, China is pressuring the Pyongyang regime to adopt Chinese-style economic reforms that will help integrate its economy with the PRC's northeastern provinces along its border with North Korea (that, I have been saying repeatedly, is the real story the Western media should be paying attention to instead of the supposed rise of the Kim Who Wasn't There™). 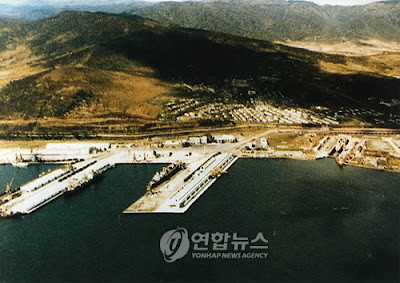 And what China gets out of it, they hope, is a stable satellite state (if not future territory, the Inner Cháoxiān Autonomous Region), along with coveted access to the East Sea (Sea of Japan). This is not something China will give up lightly, especially now that there will be PLA troops in North Korea to maintain their position no matter what happens to the DPRK government. I guess that's all the more reason to consider the solution I outlined just yesterday, which would be to preemptively grant China access in a unified Korea, in exchange for them stepping back and letting the Pyongyang regime collapse and Seoul pick up the pieces.

Perhaps there is some way to turn this big new wrinkle in our favor. One can't imagine that the North Korean citizenry is any fonder of foreign troops in their country than their fellow-traveling chinboista counterparts are in the South. So let's make this an issue in the propaganda we send to them. Lincolns, Hamiltons, and Jacksons have just enough room in the margins for a message like, "Kim Jong-il has allowed Chinese troops to occupy northern North Korea right now." Tie those to a mylar balloon and — boom! — instant disgruntlement. 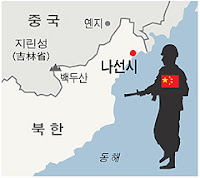 Of course, fomenting such xenophobic antipathy would mean US troops would be rather unwelcome in the former DPRK once reunification occurs, but a big part of the aforementioned plan is to keep them out of the North anyway.