A bone to pick

In the past I have cut some slack for Koreans who may unwittingly or inadvertently step into controversy by using images once condoned in American media but which are now considered offensive or otherwise taboo. But once schooled on the whys and hows that these things are seen in such negative light, of course, the naïveté card is taken away (on that particular topic) and can no longer be used.

But offensive American imagery is a different matter where Americans are involved. Simply put, Americans should know better about what is offensive in the United States. And that is why things such as the following caricature of President Obama by a very conservative organization, Patriot Update, is so, well, offensive. 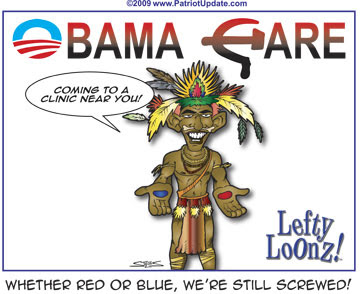 The message of the cartoon is that Obama is going to impose a basic (primitive) health care system on the American people, so there's our first African-American president, clear as day, depicted as a half-naked native witch doctor, complete with a bone through his nose.

Whiskey, tango, fu¢k! As anyone in the K-blogs knows, depictions of Africans as primitive people with bones in their noses is a racist no-no, judging by the myriad comments of how racist Koreans are because such images have appeared (still appear?) in Korean textbooks:


The prejudices are deeply ingrained and more importantly, socially acceptable. For every cartoon like the one Michael linked to, I could show you a hundred showing blacks with bones through their noses. The reality is that the Korean view of blacks (both African and African-American) is shameful and pathetic. Anyone with any experience in Korea can’t deny that fact and keep a straight face. If it makes you uncomfortable that I point out the contradiction and hypocrisy of societal prejudice on one hand and claims of pride when it’s convenient and feeds the Korean superiority complex on the other, tough. Hines Ward proves it.

Frankly, in the 2000s, there is no excuse for an advanced country — Korea or the US — to be depicting Africans or other Blacks in that way. But the difference between the two is found in the malice and derision of this particular American depiction.

The site at which I found these — which sends me email updates of their wares and their latest articles after I bought "Keep the Change" bumper stickers from them as a gag gift for a die-hard Republican voter — exists to stoke the flames of animosity against Obama and the Democrats (and apparently some moderate Republicans). I happened across the cartoon not because someone had sent me an email that had read "Hey, take a look at this sh¡t" or some such; I noticed it in my routine read of their email.

Here's another cartoon from the Lefty Loonz series: 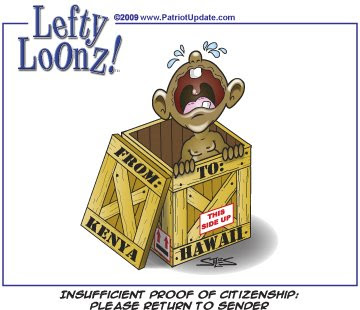 Of course, that Obama was not born in the US — or specifically that he was born in Kenya and possibly labeled as a Muslim — is a favorite theme. It is indeed a mainstream view among the right, as they proudly hail in one of their news links that "birthers are a growing majority of GOP and southerners."

Nice. And if he was born in Kenya, why not put a bone through his nose?

A lot of Whites in America, I feel, are uncomfortable with a Black (or any minority) in the White House. That doesn't mean they are opposed to a Black or minority in the White House, just that they have a little trouble thinking about it. Sort of like the nice minority family that moves in two doors down and the Whites are nice and welcoming but still trip over themselves when they talk because they can't just think of the family as just a family like any other family. They are (default) "the [insert minority] family two doors down."

The media itself sometimes doesn't know how to deal with the president to a large degree, particularly op-ed cartoonists and late-night comedian talk-show hosts. They want to make fun of him or critique his administration — its their job! — but they don't want to look insensitive. Hence, the discomfort.

Some of that sensitivity stems from not wanting to do something really, really, really stupid, like the mayor of an affluent Orange County community who emailed his constituents a gag postcard depicting the White House rose garden having been turned into a watermelon patch. 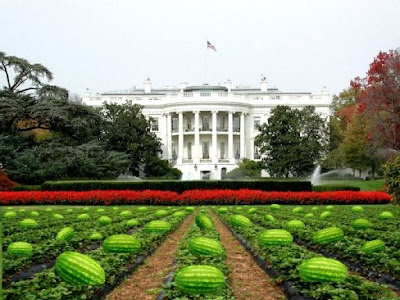 Nice. And after getting heat for this, he claimed he didn't even know about the stereotype of Blacks liking watermelon, which begs the question, if true (and it's not), why he thought it was funny in the first place. Maybe he's a fan of subak-smashing prop comedian Gallagher.

Anyway, my earlier point is not to say Americans dislike Obama or dislike having a minority president or even that they say they like him because they don't want to seem racist. I don't think those things are true of the vast majority of Americans. I think most see that Obama is a highly educated, introspective, and extremely capable head of state. But minorities in America are still seen by many in the majority as their race or ethnicity, at least initially. Whites are the default Americans (this is called racial transparency). Heck, even minorities themselves often do this.

I'd better stop now. I could go on for hours.