This has been a three-day weekend here in Hawaii, but like with all three-day weekends in Hawaii, you can't really go that far (hint: It's an island). Anyway, school is starting soon, and I'd just arrived from nearly three months in California, Nevada, and Seoul, so there was no point in going anywhere new.

Things have been happening on campus, I've been setting up all the stuff I'd stored in my car and my office, and there have been good movies every night in the lobby of this dorm, all with a Hawaiian theme of some kind. One night there was Fifty First Dates, with Adam Sandler and Drew Barrymore, which takes you around to all sorts of neat little places on Oahu that show a bit of the island's character from a local standpoint.

Though I missed it last night, they showed Picture Bride, a fictional account of a very real type of person who helped "settle" Hawaii: the women who came to these islands to marry the Japanese men who were imported to work the sugar cane plantations (and to join them in their labor). Thursday night had Hawaii, the 1966 cinematic version of James Michener's 1959 novel.

When Hawaii became a state in 1959, locals (we are told) were generally quite excited. Despite this being a majority Asian territory, everyone was to be recognized as full US citizens. Indeed, this type of sentiment still carries over some, with the elevation of one of its native sons, Barack Hussein Obama, to the highest office in the land being another sign of Hawaii's full-fledged Americanness.

But in the intervening half century, greater recognition of the troubles faced by Native Hawaiians, the unfairness of how they were dealt with historically and the enduring legacy of that treatment. Native Hawaiians are among the poorest in this island state, living in some of the worst urban environments and still largely excluded from the more elite areas.

Indeed, the very Punahou School that Barack Obama's grandparents struggled to get him into were set up so that White residents wouldn't have to have their kids attend school with the non-haole hoi polloi.

Hawaii as a nation-state is not some distant historical entity. It ended with overthrow by Americans in the 1890s, around the same time that Korea was losing its own sovereignty, and for much the same reason. Hawaii was a strategic point for projecting power to a larger area, for restocking ships, and for producing food.

The entrance of Westerners — not just Americans but also the British and others — came with no small amount of cost to the local Hawaiians, who not only lost their lands but also their lives in many cases. This is something to which we newcomers to Hawaii's institutions (especially universities) are strongly exposed: the narrative of members of a disappearing culture suffering at the hands of a (usually) unintentionally oppressive majority of squatters is quickly learned by anyone who is paying attention. Indeed, on my first Statehood Day in 2006, we were subjected to a seminar in which a local Hawaiian activist explained why Hawaii should secede from the United States. Or rather, the annexation should be recognized as null and void (thus no secession required).

To me, coming from Seoul, there was this inescapable sense that Hawaii may be to the United States what Korea might have been to Japan (especially if liberation had not occurred), and perhaps what Okinawa has become to Japan. 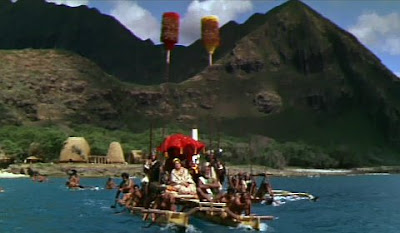 In 2009, many Hawaii residents (people are careful not to mindlessly call anyone in Hawaii "Hawaiian" the way one living in California would automatically be called a "Californian") have a different, far more sympathetic view toward the plight of Native Hawaiians and their lost culture. In that vein, movies like the aforementioned Hawaii provide insight into the folly, hubris, and greed with which Americans approached this archipelago of paradise. 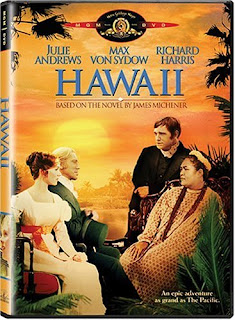 Max Von Sydow's Reverend Abner Hale comes to Maui with idealistic fervor, determined to save the souls of the island natives and befriending Queen Malama (played by Jocelyn LaGarde, a Tahitian who had never acted and spoke no English, yet managed an Oscar nomination for Best Supporting Actress and a Golden Globe Award win for the same category). While providing some positive influence, it is clear he has come to see himself as superior to those he is supposedly shepherding, and his rigid adherence to a literal interpretation of the Bible is criticized even by his wife Jerusha, played by Julie Andrews. She sees the humanity in the ways of the islanders (including the incestuous but loving marriage of Queen Malama to her husband Kelolo) and recognizes that cultural accommodation is at least a two-way street. 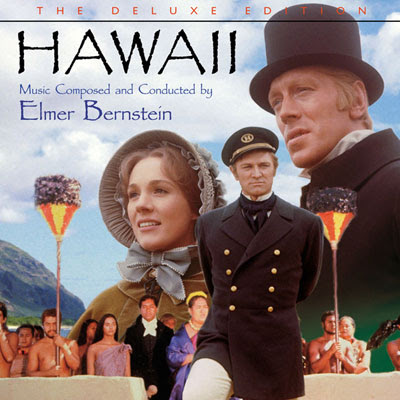 Bearing this in mind, it's hardly a surprise that the Honolulu Advertiser has stories on the percentage of Hawaii residents who consider Hawaii statehood to be good or not. Indeed, only two out of three clearly state it has been positive. In fact, 13% (a figure that is larger than the Native Hawaiian population) see it as a negative.

That's a striking statistic, these one of seven locals who feel they'd be better off not living in a state. Is this the economic downturn? Would they feel better off not being Americans (presumably territorial status is more humiliating than statehood)? Do they prefer a nation-within-a-nation status where by the Hawaiian Islands are recognized as a nation coterminous with the State of Hawaii?

It does get one to wondering: Was annexation and statehood necessary at all? Or rather, in these modern times, would a Hawaiian nation in free association with the United States be in a worse situation (or better) than a freak state on the fringe of a global power?

Maybe I'm not the one to answer. For now, I see myself as an ephemeral resident. I still maintain a California driver's license and am registered to vote in Orange County, though I do have an official Hawaii resident identification card and I operate a vehicle here. A semi-resident, I guess, but without the stake in Hawaii's future. Not yet, anyway.
on August 24, 2009