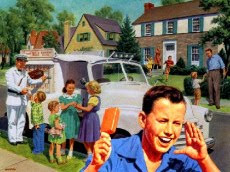 Maria Jo Fisher of the Frumpy Middle-Aged Mom blog (over at the Orange County Register) believes that ice cream trucks are "the spawn of the devil":

When I adopted my kids, a friend with six children warned me: Never, ever let them buy ice cream from a truck. Otherwise, they’ll torment you every day all summer, whenever they hear that tinny speaker.

I know, you’re saying to yourself, “That Frumpy Mom is one grouchy lady, she won’t even let her kids get ice cream, a time honored tradition.”

But since I truly believe that these trucks were sent by Satan to drive people mad, I followed her advice. I don’t want their evil dominion to spread.

I wasn’t surprised to hear about ice cream truck vendors being arrested for selling drugs out of their trucks. If you will drive around a peaceful neighborhood, blasting loudspeakers and disturbing the peace, you will stop at nothing. Drugs, robberies, murder. Hey, it could happen.

Um, okay. But for true evil, go to Korea and be forced to listen to a loudspeaker-equipped Porter truck with a tape loop or a microphone whose owner is selling garlic, vegetables, dried fish, frozen fish, pets, seasonal fruit, or God knows what else. It still sticks in my head this one guy that every week came by with a disturbing chant: "개~ 팝니다. 개 팔유!" 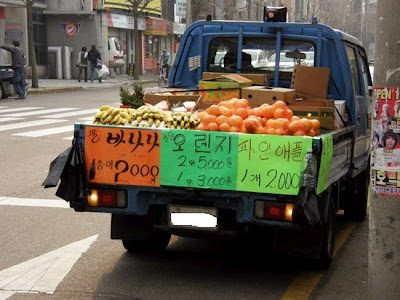 Since I and others were actually working from my home-cum-office during the day, I put my foot down with the more egregious violators (an index measured by arrival frequency, speaker volume, and length of time parked near my house) and politely — ever so politely — informed them that using loudspeakers to sell things in residential neighborhoods was in fact illegal and I would not tolerate it. If they wished to do this anywhere within eyesight or earshot of my home, I would videotape them and promptly send it to the ward and district administrative buildings (i.e., 구청 and 동사무소).
After that, they never bothered me again. In fact, even long after we'd moved from there, they still learned to just pass right on by our street. They probably have foreboding legends passed down from generation to generation as to why that street is taboo.
My neighborhood should put up a statue in my honor.
For true eeriness, however, the guy who roamed the halls of the apartment building I'd briefly lived in back in the 1990s wins hands down. Apparently he was yelling "Setak! Setakso!" (Laundry! Laundry Service!), but he did so in a way like he was chanting and his actual pronunciation of those words sounded nothing like what he was trying to say (yes, even Korea-born native Korean speakers I'd asked had difficulty figuring out at first what he was saying). The result was that I was convinced, prior to finally asking someone, that this man was in a cult of some kind and he was asking for alms.
Wait. I take all this back. The guys peddling malathion are the worst.
on August 12, 2009