No uglier than any other

Wangkon has a piece on the troubles faced by Ssangyong Motors, including the notion that Twin Dragons' cars are fugly. But I take issue with his last two examples, especially the Musso (which is supposed to mean "water buffalo," as in tough as a ...). 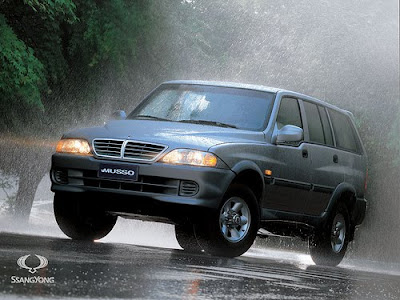 I don't think the Musso (or even the Rexton) are any uglier than American, Japanese, or European vehicles of a similar type. In fact, my 1999 Honda Passport which I drive in Hawaii is probably no better looking (the spiders certainly like it). And they certainly were popular in Korea until just a few years ago.
I had wanted to buy one of these back when our company was getting a new vehicle, but I wasn't the one ultimately in control of the money or the decision-making, so we got a practical but fun Kia Carnival (Kia Sedona) minivan that ran on LPG (LP gas, propane) instead of Diesel. Actually, for me, too, that was a dealbreaker.
on August 13, 2009