The Grand Narrative has a post on "Tamna" (spelled in the Korea Herald as "Tamra"), the "radical new Korean drama" which positively features the romantic relationship between a Korean woman and an Englishman, albeit in 17th-century Chejudo. It's an interesting read, and I certainly could have merely updated my post of three days ago on the same subject, but then I wouldn't have an excuse to put up the following picture. 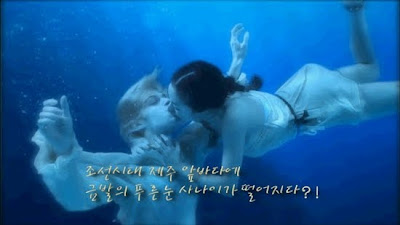 And apparently Mr Turnbull of TGN doesn't read my blog as often as I read his (if he reads mine at all), or else he would have noticed my earlier post from four days ago instead of having a reader inform him. To paraphrase Shelton Bumgarner: Kushibo Teacha sad.^^
He quotes Javabeans (a favorite K-pop site of mine) in describing the Chejudo gender dynamic depicted in the drama:

…in Tamna, the women are hard-working and tough, at all ages from moms down to young girls. The men are painted a little more cartoonishly, but I think there’s potential for more than just comic relief in the setup that shows them as the weak ones in terms of the gender balance. They cower and defer to the ladies, who, while not quite Amazonian, have agency over their own lives and families. I hope the drama explores that dynamic a little more — they don’t have to make a big issue of it, but it’s a refreshing change.

Actually, this hardly surprises me, since it fits in nicely with the narrative that Cheju Islanders have about their own culture: It is the women who were dominant in their society, which has been described as matriarchal. I've heard it explained that since women's smaller bodies are better suited to longer dives than men's larger bodies, the women ended up being more economically dominant, which set them apart from mainland culture. (Indeed, historically, politically, economically, and socially, Tamna was quite different and independent from mainland Korea, with some going so far as to question their actual Koreanness, but that's a subject for another post.)
I would again like to reiterate my earlier question about positive romantic portrayals of foreign males with Korean females in Korean media, specifically about Lee Cham, the Austria-born celebrity who became a naturalized Korean. If my memory is accurate, Lee Cham got his start in media back in the 1990s by portraying the foreign neighbor in a miniseries with whom one of the main characters falls in love.
And if I'm right about that, then I'm guessing there may have been others that the collective "we" has forgotten. Sort of like how in the narrative today about a lack (until recently) of positive masculine Asian-American male characters in American media it is forgotten that there were — in the somewhat distant past — a small handful of Asian-American actors that made mainstream American women swoon, such as James Shigeta.
Anyway, TNG gets a lot of readers from various backgrounds, so in addition to Mr Turnbull's own informed post, there will no doubt be some interesting commentary as well.
on August 12, 2009