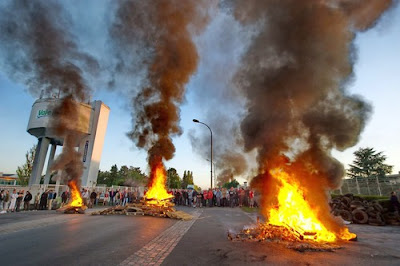 Because this kind of crap happens all over the place:

As jobs are lost, and factories close because of the global financial crisis, French workers have resorted to threatening management with violence; forcefully holding their bosses on company grounds; blocking and burning property in factories; and, in one instance, ransacking police headquarters.

The radicalized trend among the workers has "awakened an old anarchistic French tradition," said Bernard Vivier, director of a French research institute on labor issues, the IST.

He and other experts say the climate is a sign of an increasingly grim outlook for laborers rooted to the same factory, often located in small, centuries-old towns, where they have worked their whole adult lives.

The radical methods "are the expression of local desperation, because a person's job isn't just a job in our country," Vivier said. "In these towns it is something that is very rooted to the territory, a factory, the history of a people and place."

The workers echo that sentiment.

"We're not savages," Guy Pavan, a union representative for workers involved in the latest incident, said by telephone. "We are workers who don't want to get fired."

Okay, then. After referring to the denizens of the Land of Morning Calm The Irish of Asia, The Italians of Asian, and The Jews of Asia, is it time we also start calling South Koreans The French of Asia?
on August 09, 2009