Anaheim, one of Orange County's largest communities, may be Hispanic-majority now, but there are still quite a few members of other ethnic groups in town or in the area. Kyopo (Korean-Americans for those of you who just got off the plane) still have a sizable community just north of the Riverside Freeway in Fullerton, as well as honorary "OC Koreatown" Garden Grove, which itself has a lot of spillover of Vietnamese-Americans from Little Saigon in Westminster. White enclaves are still mostly found southeast of Irvine.
And this is why the Diocese of Orange (Orange County's local Roman Catholic Church leadership) has chosen to build the 1000-seat St. Thomas Korean Catholic Center in the city home to Disneyland. The $10 million facility will officially open on August 22. 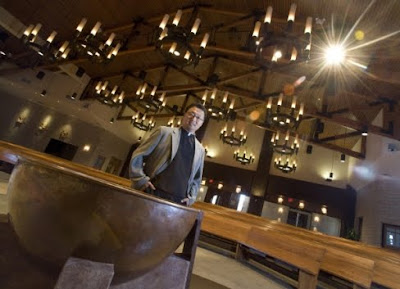 [above: Reverend Alex Kim stands inside the soon-to-open St Thomas Korean Catholic Center. Other Orange County Register pics can be found here.]
Particularly in the United States, Protestantism predominates among kyopo residents, particularly the Presbyterians. But there is a sizable contingent of Catholics (and Buddhists). Like the Presbyterians and the Methodists and the Baptists, the Catholics have a large social network, but my own feeling is that the Catholics (as well as the Buddhists and the lesser Protestant sects) are less there because of the social networking and more because of faith.
Not to say that the Presbyterian kyopo churchgoers lack faith, just that there are a lot of Sunday Christians seeking Monday deals. Or so it seems to me, sometimes. There are indeed quite a few who do good work for others, so I don't wish to bash everyone there.
on August 09, 2009