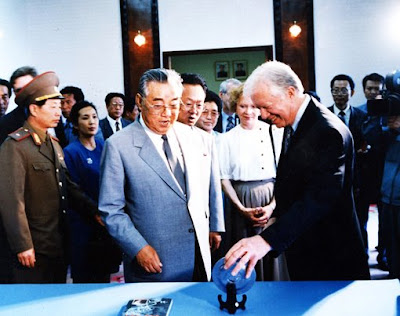 Well, in 1994, Dear Leader Kim Il-sung left this Earth just a month later, and now people are wondering if history will repeat itself. To put it bluntly: Was Clinton's visit a swan song for Dear Leader Kim Jong-il, and will we be receiving news sometime this fall of KJI's own fall?
It's an intriguing question, especially with rumors floating about that L'il Kim is in such poor health that he may not last another year.
Since last year I have warned that Kim Jong-il's rapid weight loss and deteriorated appearance is easily explained by having suffered — and survived — a major stroke. Barring a different major health issue, he may still be around for a while (and no doubt they're working frantically to facilitate that). 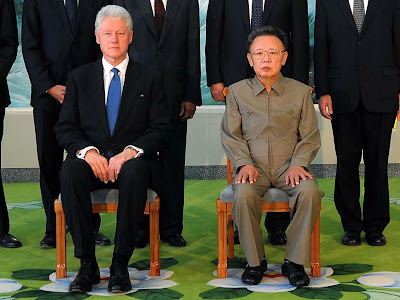 But I have no reason to deny the possibility that he may be on the way out, and the Clinton visit may be the last big number. The Clinton visit, perhaps like the Carter visit, may even provide a psychological sanction to the North Korean leader himself that, well, it's okay to move on now; you've demonstrated once again the stature of North Korea on the world stage and you've shown that the great leaders of our planet will come to shake hands with you. 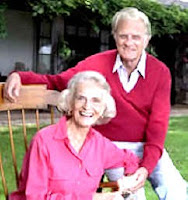 Of course, there is also the possibility that such a scenario requires a visit by American spiritual leader Reverend Billy Graham, one who can lay the groundwork that he who has destroyed so many lives to attain and/or maintain his position and power must now consider repentance. A deathbed conversion, hardly unfamiliar to the descendants of Protestant clergy. (Billy Graham's wife, Ruth, lived in Pyongyang as a high school student in the 1930s, a connection that may have given the good reverend some clout with the Kim dynasty.)
Or maybe Clinton, like Carter, will have presented the exalted one with a gift (say, cognac or Little Debbie™ snacks) tainted ever so undetectably with a toxin designed by CIA scientists to slowly bring about the demise of the one who ingests its contents, in a way that looks exactly like a natural cause of death. It's the CIA, so why not? 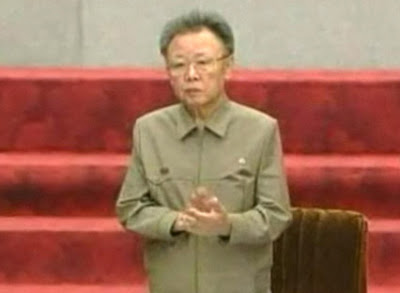 Okay, so I've written seven paragraphs of my one-paragraph introduction, so it's time to cut to the chase: If the Clinton visit is portending the quietus of the Dear Leader, when will the demise come?
I want (1) a date, (2) an official cause of death, (3) an accepted-by-the-media cause of death, and as a bonus question that won't be factored in, (3) a successor if anyone is named within the week.
So it's like a baby pool, only opposite. (I suppose we could also guess his weight at time of death, since that, too, has become something of speculation.)
I might treat the winner to an Egg McMuffin meal at McDonald's at some date in the future. In person if she's cute; otherwise I'll send a coupon.
on August 06, 2009