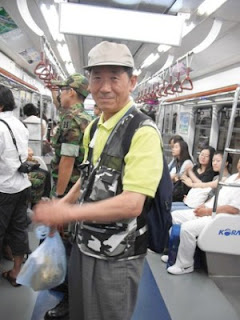 The Los Angeles Times has an interesting piece on the retirees who have come out of retirement to ride the (underground) rails and deliver packages.
Having had to rely on "Kwik Service" (퀵서비스) motorcycle couriers many, many, many, many times, I have always been impressed with their ability to go across the freakin' city in half an hour or so, carrying documents, publications or DVDs (my work involves media development, among other things), or even small refrigerators.
I wonder, then, if the subway-riding seniors can compete with that, time-wise. If they work cheaper than the otobai corps, then it could be a competitive model. In fact, the company for which Kim Hyangsoo (above) works depends on hiring "the unhireable": those over 65:

Most days, as Kim cruises the capital's vast subway network while making three or four deliveries, he'll rub shoulders with much younger workers. He proudly gives up a seat reserved for elderly riders when he sees someone he believes really needs it.

Though the pace isn't always easy, working has made him feel young again.

"To me, nothing is better than this job," said Kim, who joined the delivery service in 2007 after recovering from a stroke. "I need to keep moving and stretching."

Kim is part of a company, Silver Quick Subway Delivery Service, that employs people many believe to be unemployable: those older than 65.

The company operates counter to many others in South Korea, which look for employees to retire in their mid- or late 50s. The country's Labor Ministry is encouraging firms to raise the retirement age to help increase employment of people in their 50s and older.

As the article mentions, South Korea is set to have the most aged society in the OECD by 2050 (when I'll be 41 years older than now), so this might be a good model for other companies looking for an eager but not too expensive work force. I know that many McDonald's in Hong Kong and California do something like that; why not have them deliver packages?
on August 09, 2009