Fly over Southern California and you might be forgiven for forgetting that there are things in Los Angeles, San Bernardino, Riverside, San Diego, and Orange Counties other than cement, asphalt, and irrigated flora. Indeed, most Californians not living on the periphery of their urban scape may forget that wildlife abounds. 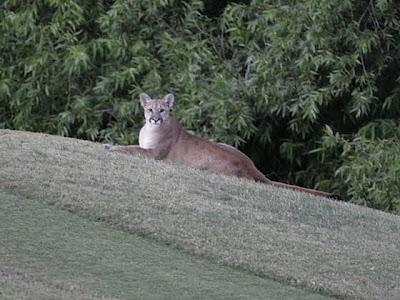 [above: If your ball goes into the trees at Orange County's Coto de Caza golf club, just use another one.]
This includes coyotes, raccoons, opossums, field mice, skunks, and even mountain lions. Yes, people in Orange County have been attacked and killed — in recent years, I'm not talking back in the ranchero days — by mountain lions.
And up in the mountains that hem in the L.A. Basin, there are bears. Wild bears. The San Bernardino Mountains reach well over 10,000 feet (3000 meters) in some places, and they include an awful lot of forests. 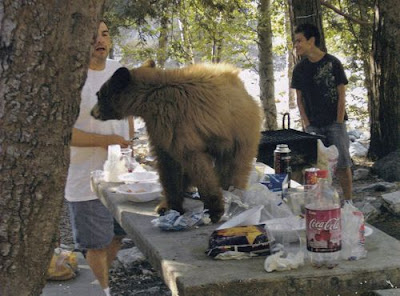 City folk like to go over there and picnic and, unfortunately, act like idiots. So says the Los Angeles Times:

When a bear decides it's a fine idea to hop onto a picnic table surrounded by people, something clearly has gone wrong. But officials say it's not the bear that is to blame.

In fact, the bear that forced the closure of a picnic area next to San Bernardino National Forest's busiest trailhead on July 7 had simply adapted to a quick and easy food source: hot dogs and other human fare left out — sometimes intentionally — by picnickers and area residents.

"People were leaving a lot of food unattended; they weren't properly throwing it away in the bear-proof cans. There was even reported cases where people were intentionally feeding the bear," said John Miller, deputy public affairs officer for the U.S. Forest Service. "What we have is ... a human behavior problem."

Once bears learn to associate human scent with easy food sources, they are more likely to venture into picnic areas, according to Jeff Villepique, associate wildlife biologist at the California Department of Fish and Game.

Picnickers have reportedly enforced the behavior by tossing food at the bear and getting up close to take photos.

"The bear has pretty much lost its fear of humans," Villepique said.

From personal experience, I think part of the problem may be the very different types of access there are in the ubiquitous national forests compared to the rarefied national parks. On visits to Yosemite, Sequoia, Zion, Yellowstone, etc., it was drilled into our heads that this was bear country, and we had to do this, that, and the other to prevent wild animals from entering our camp (which they sometimes did anyway, including mama bears with their cubs, which can be very dangerous to humans).
In my jaunts into San Bernardino National Forest, however, we would rarely see any such message. Maybe the authorities thought it was obvious, but not feeding animals "people food" (which is not fit even for people sometimes), keeping food out of sight in your car, or even that the smell of toothpaste can attract a bear, are not naturally intuitive, common-sense things. 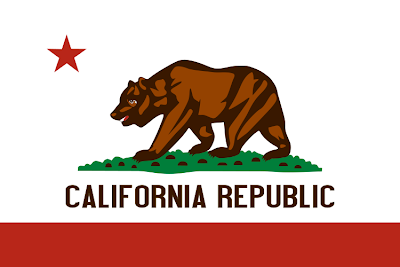 [above: Early settlers to California took down all the bear warning signs and turned them into independence-minded flags.]
In fact, back in 1986 when five-year-old Laura Small was mauled nearly to death by a mountain lion, her parents had no idea — there were few if any posted advisories — that a girl walking by herself near the camp would be in such serious danger. After the attack, that same area was closed to all children under 18, even those with an adult.
I just hope some hapless kid on a family picnic doesn't get end up getting attacked by a bear because his/her family — or someone else's family before them — was acting like an idiot.
on August 13, 2009