Don't buy the Horizon juice box at the Waikele Starbucks 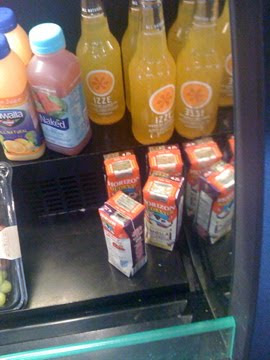 So I'm sitting in the Starbucks next to the Borders book store across the street from Waikele Premium Outlet across town, because I'd promised to take "C" shopping there but I didn't want to do any actual shopping. I'm getting some studying done, plus some work.
Some kid — a bit older than a toddler but not much more disciplined — gets away from his maternal parenting unit and grabs the Horizon organic drink in the foreground of the above picture. It may or may not be a juice box, but it looks like a juice box, which is probably why junior decided to grab it. Then, of course, he runs all the way to the other side of the store with it, going past me, which is why I looked up from my diligent study efforts.
Maternal parenting unit doesn't wish to pay for said organic beverage because it probably costs double or triple whatever it would cost at Target, if Target actually sold such a thing.
So MPU tells him "No!" and instructs junior to put it back, which he doesn't, so she grabs it out of his hand and places it back in the refrigerator case herself, next to the fresh sandwiches and fruit.
But not until he sneezed directly on it at least twice, once before she noticed he'd grabbed it, and once after she told him to put it back. Then MPU walks out of the coffee house, child in tow.
So, again, do not buy the Horizon juice box at the Waikele Starbucks. It's been contaminated. I, after seeing junior eject a fine mist of probably virus-saturated snot all over the ORDER HERE line, would have called in a hazmat crew. But that's me.
Coming soon: my post in favor of mandatory parenting licensing.
on August 30, 2009