Power to the (White) people!

This is something funny that's been going around the Internet. Apparently Microsoft had run an ad about empowering company workers with the tools they need, and in the US version they had an Asian guy, a Black guy, and a White woman, but in the Polish version of the same ad, the Black guy was photoshopped out and "replaced" with a White guy. 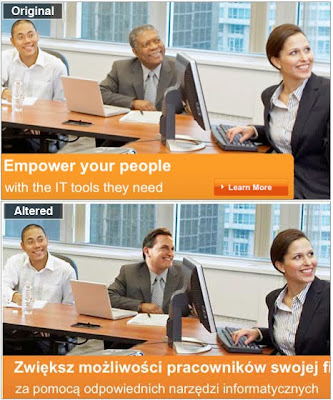 Just how many Microsoft marketing execs does it take to screw in a lightbulb?
I'm tempted to say that this is one of those things that, had it happened in Korea, the K-blog commentariat would be all over to say how it's a sign of how racist Korean society is and how it discriminates against Blacks. And yeah, that maybe true.
But really, no matter where, this is all kinds of stupid for a major global entity like Microsoft. Or, had they done it, Apple, LG, Samsung, Toshiba, Fujitsu, Applebee's, WalMart, Costco, BP, etc., etc. They should know better. (In all seriousness, I want to point out that the last thing I see MS founder Bill Gates as, it's being a racist. After amassing a country-sized fortune from some questionable business practices in the past, he is taking his money and trying to improve the lives of everyday Africans, something only a handful of people with appropriate means or influence — like Bill Clinton — have really sought to do.)
Sure, they might have thought that, "Well, there aren't many Black people in Poland, so the original ad would have less relevance to local consumers." Fine, but then why keep the Asian dude? And for that matter, why keep the Black guy's hands? Why not just get all-new "models" that would look like a cross-section of the type of people one would expect to find in Poland?
And while we're at it, if you're going to have the Black/White guy use a Macintosh, keep the freakin' Apple logo in the picture. After all, Macs do use Microsoft products. I've got the "empowering" MS Office running right now, and soon I'll set up Windows XP on the BootCamp side of this new MacBook Pro I got the other day (long story, will tell later, but it's one reason for the relatively light posting as of late).
Anyway, MS has apologized, but if their troubles persist, I suggest MS call LG pronto. LG has the skills and experience needed to turn that White dude back into a black guy pretty quick.
on August 28, 2009