Chevrolet Volt to get 230 mpg

I'm back in the US where I've been hit by sticker shock at the gas pump. Back in Seoul, I use an LPG (i.e., propane) vehicle, so the cost of gasoline has been alien to me for quite a while. But now that I'm in California, where gas is around $3 a gallon, and about to go to Hawaii where it is even more, I'm feeling not so happy about this stuff.
Maybe if I were to own a Chevrolet Volt, I'd be happy. This is a plug-in car, meaning you charge it at night (or whenever you're not driving) and then run off the electricity for about the first 40 miles, after which gasoline power takes over. 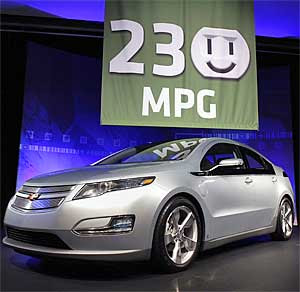 Because of this configuration, General Motors says the vehicle can get about 230 miles per gallon of petrol, far more than any of its competitors. While the electricity wouldn't be as suitable for long trips, it would be a great car to have as a daily driver, especially in a place like Honolulu where going more than forty miles in any direction lands you in the ocean.
This car has nothing to do with South Korea GM-Daewoo (it's made in Michigan), not even with the way GM-Daewoo has been used by GM in Detroit as a means of delivering GM vehicles to Europe. Perhaps, if the Volt concept works, South Korean automakers (and their Japanese counterparts) will start looking into this type of vehicle.
But "working" would require some Americans do some slightly inconvenient things in the interest of fuel economy, like plugging in a car at night. But cell phones' ubiquity has trained us for that kind of nightly ritual, so who knows?
UPDATE:
Wait, no. Dokebi reminds me that "the lithium polymer ion batteries are from LG Chem & its US-based operation, Compact-Power Incorporated." He adds that LG chem will supply the batteries for other GM vehicles." Furthermore, "GM's not the lone customer. BMW's will be powered by batteries from a joint venture by Samsung SDI and Borsch."
I'd completely forgotten about that.
on August 12, 2009